Hello everyone! This is my review of the Kantai Collection light novel series-Kakuyoku no Kizuna volume two! 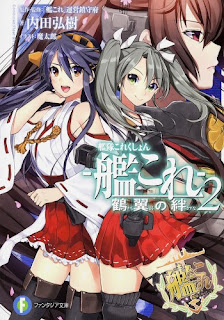 Synopsis: After winning a major turning point in the previous volume, a new and unknown Abyssal was spotted by the Submarine Musumes and it was reported back to the Admiral. He decided to begin the next phase in their operations and initiated a three night battles to take back a strategic island. However tragedy strike as Hiei who tried to win the heart of her elder sister, Kongo suffered a horrific defeat which scarred her badly. At the same time, Zuikaku and Shoukaku went to meet the Naval's final weapon-Yamato. She refused to fight in the front lines and had one request-to end her life by her fellow comrades...

If the previous volume didn't get you all pumped up, then this volume is full of action all the way. From the beginning of the new operations of how Akagi and Kaga encountered the new Abyssal force who nearly decimated them to Zuikaku and Shoukaku tried to convince Yamato into joining them.

In the anime series, Hiei was more of an annoyance but her love for Kongo was extreme in the novel. She is willing to do anything to win her sister's favor but at the cost of her life. Haruna actually show more concern to Hiei since she was with her throughout the ordeal. By the way, Kongo's attitude is bit of hard love since she doesn't want Hiei to feel sorry for herself and spend the whole volume avoiding her.

Yamato actually have a personality in the novel unlike the anime series where she only appeared in two episodes with little character development. In here, she still retained her memories of what happened in her maiden battle and blamed herself for the lives of those on board her ship. Of course, Zuikaku who is stubborn as a bull refused to give in to her childish thoughts and came up with a plan and I was actually touched on how she and Haruna helped both of them to overcome their traumas.

In the end, this is a great volume with dramatic moments and an awesome finale battle that lasted for more than an hundred over pages. A great follow up to the first volume and a must read if you want to see how Hiei overcame her fears and how awesome Yamato can truly be if she joined the battle early in the war.
Posted by Kragito at 9:13 PM