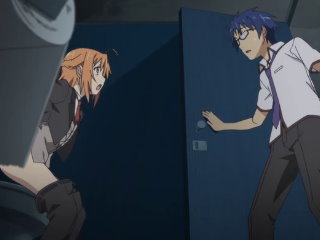 Mayo Chiki: Sakamachi Kinjiro has a secret-He get a nose bleed whenever a woman touch him. He was mistaken as a homosexual by his classmates but when he discovered that the school idol's Butler is really a female in disguise, he is in for a whole lot of pain. It is a clique that it has been used many times like Girls Bravo, Hayate no Gotoku and Nogizaka Haruka no Himitsu. I just giggle a bit when Kinjiro found out Subaru's secret. But then nothing original so I won't be following it but will watch if these is nothing else to watch. (Subaru's master, Kanade actually give Kinjiro a nickname-Chicken Kun which is a pun of his name-Sakamachi Kinjiro) 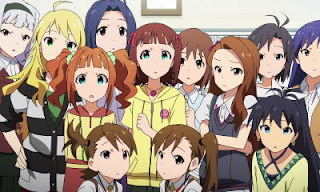 The Idolmaster: From the beginning of the episode, it felt like a reality show of the lives of these 13 girls who aim to be Idols. The "cameraman" interviewed the girls without any voiceover was a typical method done in most reality shows. Those who watch Xenoglossia which is the alternative universe might have to throw all that as these is no rivalry or emo moments. Makoto is not competitive, Iori is annoying, Yaori is hardworking, Ami and Mami are brats. They even include the three girls from the supposedly rival company in this story-Miki, Hibiki and Shijou which are fresh characters not included in Xenoglossia. 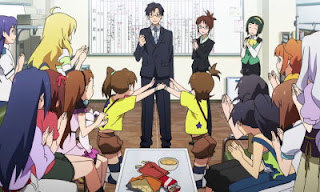 When they discovered the "cameraman" is the new producer who is voiced by Akabane Kenji, their expressions is priceless! I play a bit of the game on PSP but was not into it however this show will make me interested to know more about the girls. 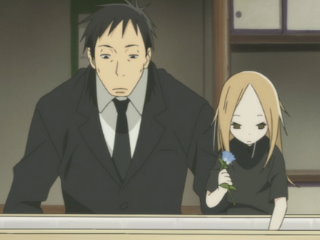 Usagi Drops: I should say this is the sleeper hit of the season! Daikichi returned to his grandfather's funeral and discovered his grandfather has an illegitimate daughter named Rin for a few years. Rin's biological mother dumped her at their home which immediately Daikichi shared a connection with the little girl. I like this scene when Rin placed Bell flowers on the coffin which is simple but yet powerful. 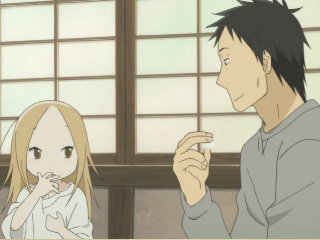 She asked Daikichi is her "father" is not waking up and he replied in a quiet yes. This is good. The scene when the relatives want to send Rin away, he stood up and asked Rin if she want to follow him. She just followed him without any questions. If you like a heart-warming story, go ahead and watch it. (By the way, Rin is technically Daikichi's aunt since she is his grandfather's child)
Posted by Kragito at 9:58 PM