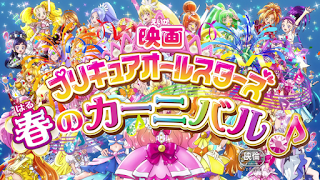 Synopsis: The various Precure teams including Go Princess were invited to a Spring Carnival in the Kingdom of Harmonia. However it is a trap devised by a two thieves named Odoren and Utaen who has already abducted the Royal family and his aim is all the Precure transformation items. Can the girls able to figure out his plan before all is lost? 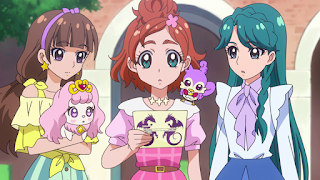 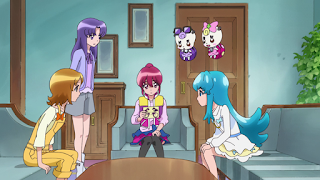 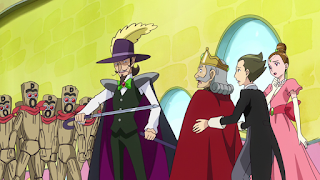 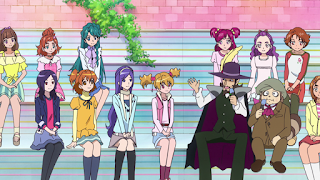 The plot is nothing special as we have seen it before in different Precures movies. However this time, Toei decided to go all "Coco Puff" as almost two-third of the film are musical numbers. (mainly from the different seasons' opening and ending songs) But the way they presented the songs felt like a Japanese variety show-(Music Station if anyone remember?) and both Odoren and Utaen interviewed the girls like they are celebrities. 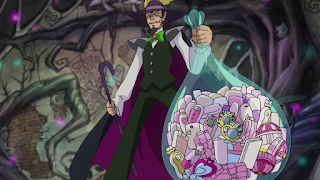 Sure, there are some original songs like how Odoren and Utaen boasted as being great thieves but that's the problem-the villains are not interesting at all. I know they are going for a lighter tone after the last All Stars movie was pretty dark but come on, they are making the two villains like being too powerful that the girls couldn't handle them in the beginning. (Although the girls overcome it in the end)


Then there are the various teams. As usual, not everyone returned to reprise their characters leaving them like dummies in the background. Although there are some scenes during their performances which showed the aftermath when their series were over. But come on, Toei, everyone before Smile Precure should be in their adulthood! I want to see an adult Honoka, Karen, Love, Setsuna, Hibiki and Kandae which I am sure some of you older fans want to see that too! 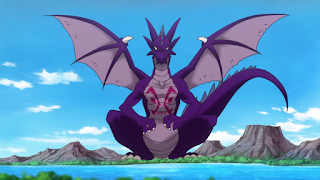 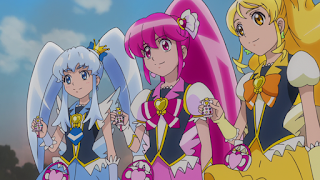 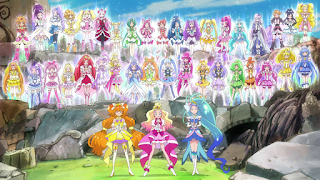 The final battle is not with the two thieves but rather a dragon as the carnival was meant to calm the dragon but since it was sabotaged, the dragon is about to unleash it's anger on the kingdom. But instead of using Miracle Lights, the girls follow what Kamen Rider Gaim did during the Heisei Riders vs Showa Riders movie-A special Dress Up Key that contained all the previous teams' powers into one and the Go Princess team saved the day. (Yeah...not excited about it)

Overall, my personal opinion is not a good one as this is the worst All Stars movie ever. It make Super Hero Taisen Z a classic and I personally didn't enjoy that movie either. Maybe Toei should stop making these movies for the time being and re-evaluate what is good and remove all the bad points from the various movies. If you like musical numbers, more power to you. A few songs here and there is fine but this movie really make me want to delete it from my hard drive.

Final Verdict: A big D. Delete the movie after watching. It is not worth the effort to keep it!
Posted by Kragito at 2:41 PM