Hi, Everyone! This is my short review of Episode 22 of Delicious Party Precure and my thoughts on the episode. 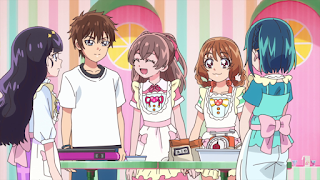 Basically, this episode focus on Takumi/Black Pepper and after a battle, Narcistoru taunt him that he has no stake in aiding the girls which questions if he is doing the Black Pepper getup as a way to secretly help Yui only.

Takumi then learned of his friend Yosuke trying to create the "Legendary Crepe" for his girlfriend who is hospitalised. Takumi went to find Yui for help but got the rest of the girls and they all chip in to create the Crepe. It is also the first time Takumi and the girls got together and I hope there will be more chances in the future since they are unknowing "Comrades".

Of course, Narcistoru has to ruin the fun and capture the Crepe fairy which led everyone into battle. Even though Narcistoru tried again to taunt Black Pepper but he has already made up his mind that he will also protect peoples' memories from the Bundoru gang. Black Pepper even makes a quote that the same attack won't work on him twice which is a reference to Saint Seiya and how the same attack doesn't work twice on a Saint. 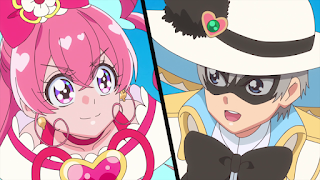 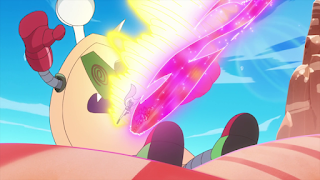 Black Pepper and Cure Precious even show they can work together with combination attacks which I enjoy in this episode. In the end, everyone wrote something on their thank you note (More Merchandising!) including Yui who wrote a thank you note to Black Pepper which she kept in her room. The final shot was Kokone writing to her parents on the same note...

Overall, a good distraction after two episodes of Kokone and Ran's interaction with Amane which we really need since the two previous episodes were kinda predictable. But I got a feeling that even after Takumi/Black Pepper joins Team Delicious Party, there isn't anything else to the hype other than more power-ups and the plot unfolds about Takumi's father and the Cookingdom.

Oh yeah, and Kome Chan has grown into an adorable little girl and Rosemary gave an excuse that she is his cousin's daughter. In the next episode, Kokone's parents returned from overseas and apparently her mother has a "God's tongue" so is she like Erina from Shougeki no Soma whose taste buds can not be satisfied with ordinary food? Until then, stay safe and see you in the next post!