Hi, Everyone! This is my short review of Episode 19 of Delicious Party Precure and my thoughts on the episode. 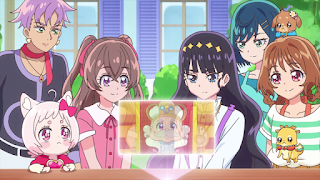 Amane is now part of the team and she was even given the special glass cup as a sign of friendship. After introducing herself to the King and Queen of Cookingdom, one of the questions that popped up was about the stolen Recipe-Bon which apparently was stolen before and then recovered before the Bundoru gang stole it again.

Furthermore, the suspect happened to be Cinnamon aka Takumi's father which led to some doubts for Rosemary to pounder. I believe that there might be an insider in the Cookingdom that is also part of the Bundoru gang and Cinnamom might have his own reasons for what is really going on. 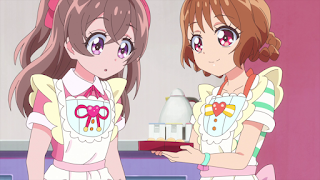 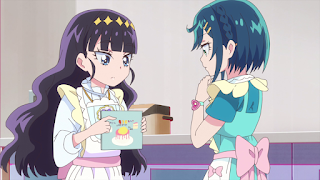 The focus of this episode is Amane planning to bake two cakes for her elder brothers' birthday which the girls get with the preparation where we do learn that Amane has a kinder side and really loves her brothers. But when Narcistoru captured the cake fairies, the girls sprang into action and this time, we get our full team roll call which is still as lazy as ever with them standing with their hands on their hips.

I do notice that Cure Precious always faces head-on the Ubauzo which resulted in her getting caught again for the umpteen times. Black Pepper (who appeared again) tried to save her and got a surprise with Cure Finale snatching his chance and even doing a Princess carry for Cure Precious. I could sense some rivalry between Black Pepper and this new Gold Precure. (Toei has confirmed that Cure Finale is a Gold Cure which I don't really see) 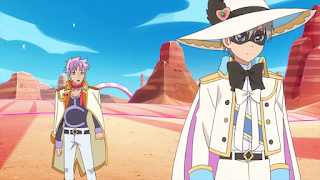 After the battle, Rosemary tried to probe Black Pepper about Cinnamon but he refused to say anything it and left...

Overall, it did leave some interesting questions on who is really responsible for the stolen Recipe-Bon and the connection with Cinnamon. Cure Precious really needs to learn how to fight properly since her reckless actions might cost the team if she keeps this up in future battles. 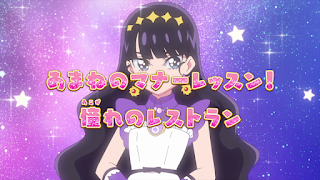 In the next episode, the girls visit Amane's family's high-class restaurant and she insisted that the girls learn some proper table manners. Until then, not much to say. Stay safe and see you in the next post!