Hi, Everyone! This is my review of Episode 17 of Delicious Party Precure as Amane begins her road to redemption. 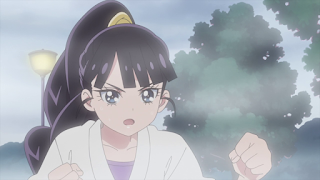 We see Amane training with her brother at the park before dawn as the next scene is at the Cookingdom, the King and Queen discovered the creation of a new Heart Crystal and informed Mari and the Energy Fairies about it. 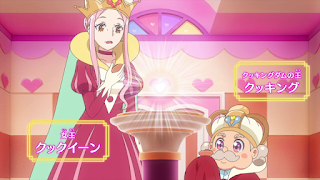 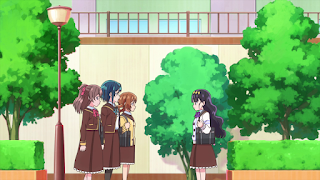 The girls arrived at school and saw Amane has returned but before they could get more details from her, their peers surrounded Amane, they decided to meet her later after school. Mari informed the girls about the Heart Crystal that was delivered by the King and he explained the Crystal was created due to the number of positive energies the town people produced thanks to the girls' efforts. 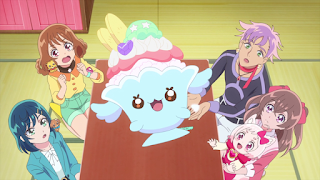 A Parfait Fairy also appeared and thanks to Pam's translation, it wanted to see Amane again. They went to Amane's family cafe and saw her talking to her vice president, Moe. Amane wanted to step down from chairman but Moe was against it. She even mentioned that Amane gave her encouragement by treating her to her family fruit punch dessert that gave her the chance to enjoy playing the piano. The Parfait Fairy also approached Amane and she is still able to see it. The Heart Crystal accidentally fell onto Amane and when she picked it up, it resonated with her. Mari realised that and wanted to ask Amane further but Narcistoru has captured a fairy nearly. 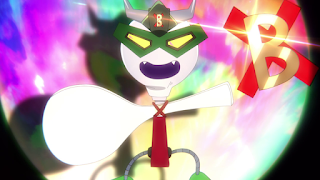 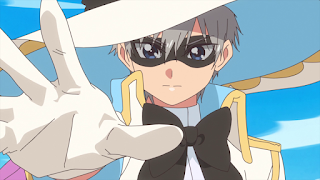 The girls and Mari rushed to the scene when Narcistoru created an Ubauzo out of large scope and splatter. They then entered the Delicious Field to battle. The Ubauzo was surprisingly strong and nearly defeated the girls when Black Pepper appear to aid them. 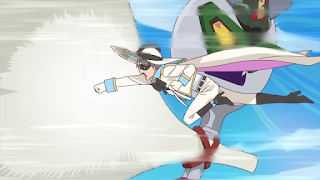 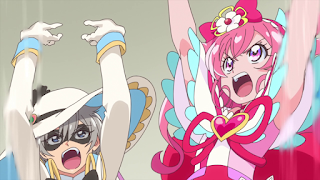 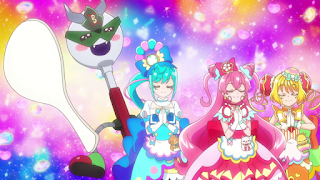 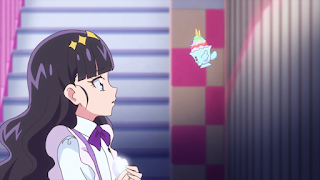 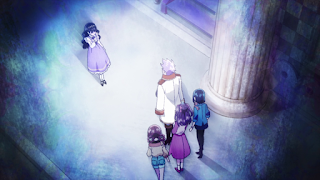 The girls and Mari returned to Amane and he explained that she is worthy to become a Pretty Cure since the Heart Crystal resonated with her. But Amane declined the offer...

My thoughts on Episode 15 and 16 was okay but felt these two episodes should be in the earlier part of the series as they deal with Kokone's indecision to take a stand and getting pressured by her peers while Ran's quirk was made a joke at school by her classmate, Takagi until she finds out Takagi has issues with his brother. Furthermore, Black Pepper appeared as an observer and didn't even appear in Episode 16 at all.

As expected, this episode focus on Amane's path to redemption. Seeing how she wants to step down as Chairman and reject to become a Pretty Cure might have something to with her being Gentle and the horrible things she has done before. We will probably know the reason in the next episode but I have a feeling that the Parfait Fairy is the key for Amane to regain her confidence to join the team next week since next week's preview already spoiled it.

Narcistoru also step up his game as we now see him combining two items to become an Ubauzo and the girls barely survived thanks to Black Pepper and Mari's quick thinking. It is just a matter of time before Narcistoru might resort to something worse that the girls are going to need some serious help in the future. Black Pepper actually joined the fight and I love how he act cool in front of Cure Precious and they worked together pretty well. 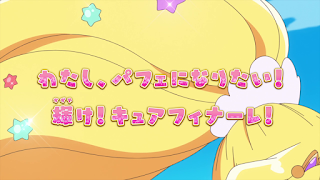 Well, this episode is a warm-up for next week's conclusion as we will see the debut of Cure Finale. Until then, stay safe and see you in the next post!