Hi, Everyone! This is my review of Episode 14 of Delicious Party Precure and the arrival of the Masked Teen Black Pepper! 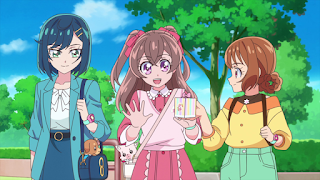 Ran bought a new product Sweet Crystals which contains different flavours of sweets for everyone to taste. The girls then spotted Takumi being confessed by a girl named Tomoe who ran away after confessing and didn't hear Takumi's answers. 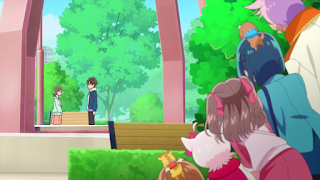 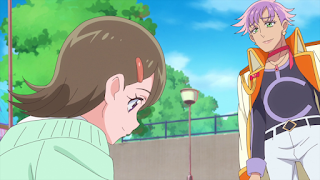 The girls and Mari saw her and they learn that Tomoe has a crush on Takumi since they both loved to put mayonnaise and ketchup in their pasta. Mari encourages Tomoe to have the courage to hear Takumi's reply which she planned to do. 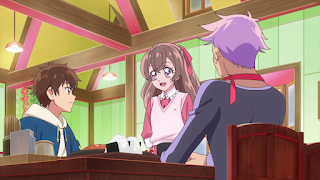 Later, Takumi went to Yui's family restaurant and saw Mari at a table. He wants to confront Mari about Yui but instead got teased about Tomoe's confession. Takumi asked what was Yui's reaction which is just only surprised about it. 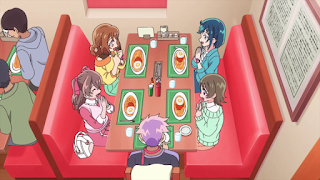 The next day, after the girls and Mari failed to meet Amane again at her home, they went to eat some pasta and joined Tomoe together. But Narcistoru appeared to capture the Pasta fairy and Tomoe lost her memory of why she loved eating pasta. 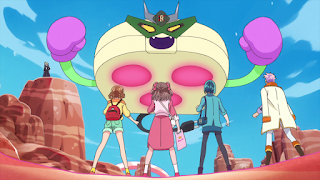 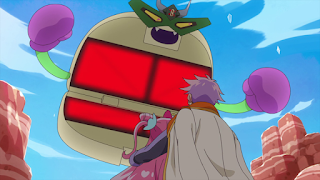 The girls and Mari confronted Narcistoru and they entered the Delicious Field with Takumi trailing behind. Narcistoru created a Ubauzo out of a sandwich maker and the girls were getting overwhelmed by it. When the Ubauzo was about to attack a weakened Cure Precious and Mari, a blast knocked the Ubauzo out and when the smoke cleared, a masked teen appeared in front of the girls. 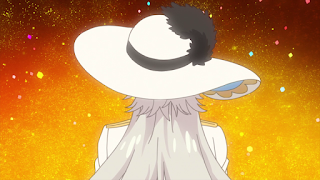 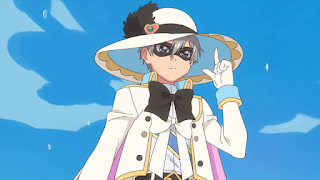 The Masked Teen introduced himself as Black Pepper and Mari finds him oddly familiar and calls out his name "Cinnamon" after seeing a Delicious Stone on his hat. But Black Pepper has no reaction to his reply. The girls then finished off the Ubauzo with Triple Mix and saved the Pasta fairy.

Black Pepper disappears after the battle but Mari wonders if that is really Cinnamon-one of the "Cook Fighters" from Cookingdom. 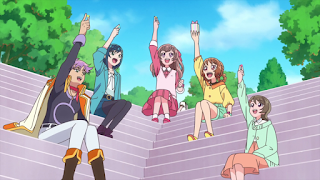 Takumi finally replied to Tomoe and she told the girls and Mari that she was rejected by him. They cheered her up with some Sweet Crystals sweets as everyone wondered what their first love will taste like...

Although this episode is the introduction of Black Pepper, it keeps on focusing on the Sweet Crystals in almost every scene that even the Bundoru gang were also tasting. Toei, I know you want to promote your items but this is too obvious that like what Mike Myers said in Wayne's World-"I will not bow to any sponsor" and continue to eat a slice of pizza from Pizza Hut on screen.

Minus Tomoe's first love in this episode, we get to know more about Black Pepper from Mari and I suspect that Mari has a crush on the Original Black Pepper named Cinnamon who maybe Takumi's father Monpei is Cinnamon and he belongs to a group of "Cook Fighters" that protect Cookingdom. The dots are getting connected...

It was expected that Yui was only surprised that Takumi has a love confession which probably means she has yet to see Takumi as a boyfriend but rather as a childhood friend. Maybe she might end up liking Black Pepper in the future like Sailormoon and Tuxedo Kamen's encounters. I find Black Pepper not cool enough with his debut and not even theme music for him? But I understand this is his first rodeo so maybe after a few times, he might even make an impact on Cure Precious but hopefully not too long. 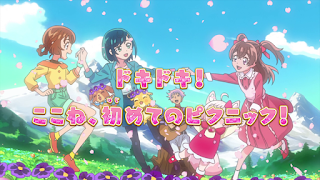 Next episode, the class is going on a picnic outdoor and Kokone is excited as she never had a picnic before! What hijinks will ensue during the picnic? Until then, stay safe and see you in the next post!