Hi, Everyone! This is my short review of Episode 8 of Delicious Party Precure as the girls decided to go on a food tour in their town! 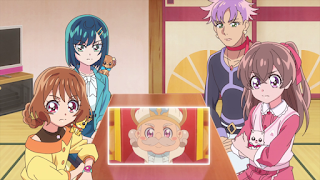 The girls and Rosemary reported their findings to the King of Cookingdom and promise to work hard to defeat the Bundoru Gang. Ran felt that her blog postings were the cause of the Bundoru gang's attacks and couldn't sleep the whole night. 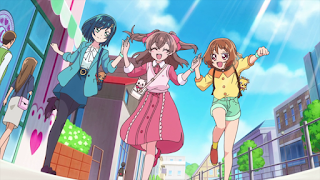 The next day, Yui ignored Takumi's request to go on a date (It is actually coupons for half price hamburgers), she found Ran as her not usual self and decided for the three girls to go on a food tour of their town. The girls enjoyed themselves as they explored the various street foods and while relaxing at the park, Ran claimed she decided not to post anymore on her blog since it will be targeted by the Bundoru gang. 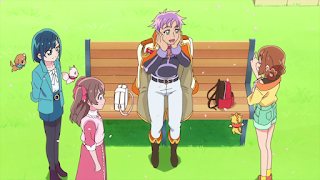 But the girls and Rosemary explained to her that it was her posts that everyone including them gets a chance to enjoy such food as they love her describing the food with such passion. Gentle kidnapped the Hamburger and French Fries fairies and the girls were alerted to the call. 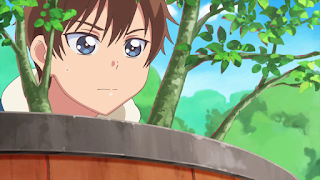 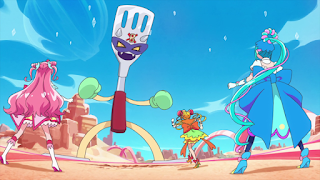 Gentle then created an Ubauzo and when Rosemary was creating the Delicious Field, Takumi was nearby and he too entered the field. The girls transformed and began to battle the Ubauzo. But their attacks were deflected since it is created from a splatter. Cure Yum Yum saw a crack in the ground and she started creating holes in the ground to prevent the Ubauzou from moving. She then finished off the Ubauzo and saved the fairies. 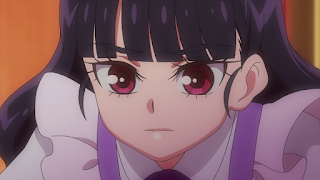 After the battle, the girls enjoyed some hamburgers and fries at Yui's place. Ran decided to carry on posting on her blog by getting take-out every time. Meanwhile, Gentle was struggling in an alley and was revealed to be Kasai Amane...

Since our three girls finally assembled, it was expected to have a bonding episode to know all three girls better with a food tour. Ran blamed herself as the Bundoru gang particularly, Gentle was browsing Ran's blog for her next target. But in the end, Ran was encouraged by her friends that her posts are interesting and that it makes them want to taste the food as well which she is very proud of it. 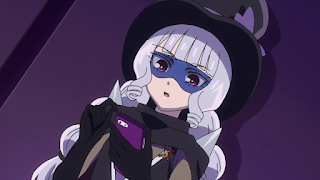 As expected, Gentle is revealed to be the head of the student council, Kasai Amane. But somehow, I don't think Amane is really a bad person as she is having a flashback encounters with the girls earlier in the episode while reporting to Lord Godatz. Furthermore, she was struggling when she changed back in the alley and suspected that Amane might be manipulated by an unknown force. Hopefully, we won't have to wait that long for the inevitable reveal to the girls about Amane's alter ego.

Furthermore, Takumi is also getting suspicious of Yui hanging out with Rosemary and after seeing them and himself teleported into the Delicious Field, it is also a matter of time before Takumi is not just a childhood friend but someone who might or might not be related to the Cookingdom. 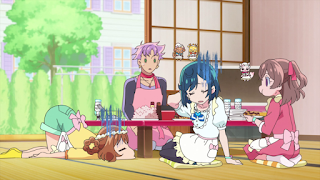 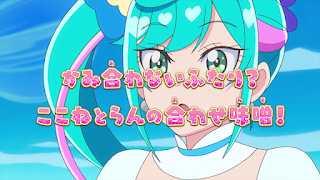 In the next episode, Kokone and Ran couldn't get along about Ramen, Sandwiches and Takoyaki?! Until then, stay safe and see you in the next post!