Hi, Everyone! It has been a while since I updated my blog. A new year, a new season of Precure awaits us this February with Delicious Party Precure! Let's break down the trailer and see what is the tone of the series. 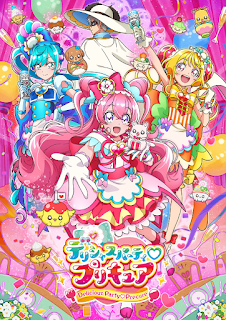 This season is about the food we eat and the joy of eating which is definitely will make anyone's stomach rumble for some foods. The plot is about the Kingdom of Cookingdom's most prized possession, the Recipe-Bon was stolen by the Bundorn Thieves and three fairies arrived at the town of Oshina Town and encounter our three main girls. 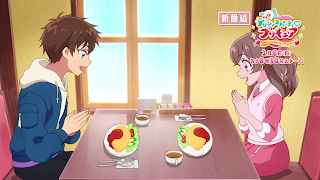 Our new Lead Pink Cure is Cure Precious whose alter ego is Nagomi Yui, an energetic 14-year-old girl who is very active and also enjoy a good meal after her activities. Her mascot partner is Kome Kome, a Rice Energy Fairy. Yui is voiced by newcomer Hishikawa Hana.

We also see that Yui has a childhood friend, Shinada Takumi who keep a watch over her and I am pretty sure that he might be the masked white character in the promotion poster. Our last male support character was Seiji from Happiness Charge Precure so it is nice to see another male character who has close connections with our Cures. (Hopefully, it doesn't mess up like Happiness Charge did) Takumi is voiced by Uchida Yuma. So will his elder sister, Uchida Maaya appear in the show as well? (Please do!) 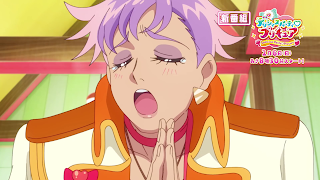 We also have an adult character, the Flamboyant Rosemary who is in search of the Recipe-Bon and might play a mentor role to the girls. He is voiced by Maeno Tomokai who also did the voice of White Blood Cell in Cells at Work and the current voice of Kyo Kusanagi in the King of Fighters series.

One of the Bundorn Thieves also appear in the trailer and her name is Gentle (which is odd for a thief's name) and she is voiced by the talented Kayano Ai (Yes!) I could guess that she might use a deeper voice as Gentle and maybe she might change sides later in the series and become a Precure too with a more lively voice. (Do you think Gentle might have similar personalities like Darkness from Konosuba? I really enjoy Darkness whenever she gets abused and her voice becomes very horny...maybe not in a morning kid's show) 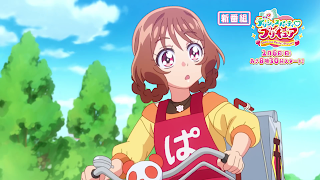 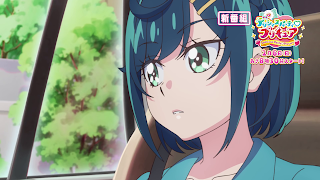 Also introducing the other two girls, Fuwa Kokone and Hanamichi Ran who transformed into Cure Spicy and Cure Yumyum respectively. Kokone is voiced by Shimizu Risa who voiced Hayasugi Sakura in Shikaileon series and Ran is voiced by Iguchi Yuka which anime fans will know as Index from the Index series and Hibari from Senran Kagura series. Both girls will also have Mascot Fairies- Panpan who is a Bread Energy Fairy and Menmen who is a Noodle Energy Fairy. 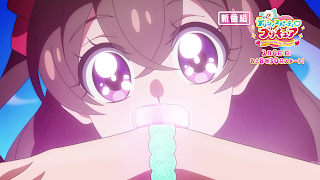 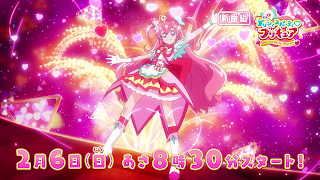 Cure Precious's costume look good since it gives similar vibes to Cure Grace and Cure Whip's costume. Cure Spicy hairdo is really odd like Cure Berry while Cure Yumyum looks too similar to Cure Lemonade. Overall, I hope Delicious Party Precure will be good since, to be honest, I didn't enjoy Tropica Rouge Precure so far. 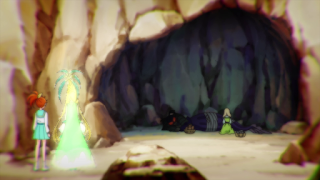 Speaking about the Elephant in the room, here are my thoughts of Tropical Rouge Precure so far as we are three more Sundays away from the finale. I felt Tropical Rouge has no clear directions of what it wants to be. Does it want to be a slice of life series with a monster of the week that cause minor inconveniences or it is about a fish out of water story with Laura? As I said before, Laura shouldn't be a Precure since her personality is too self-centred and it was just one moment of selflessness that grant her to be a Precure which is lazy writing.

Furthermore, there was no serious consequences like Laura can't swim in human form but she overcame it and many of the episodes after that still focus on her "Fish out of water" experiences as she interacts with other people which leave very little development for the other girls.

Manatsu probably got it easy since it was revealed she meet Laura before as kids but Laura was mind-wiped when she returned to her kingdom which got Laura really mad but it was for a moment and then never talk about it until today's episode when she finally confronted to Queen Melusine but nothing was resolved because the Fool's Casket is finally revealed and Bulter claimed it is going to be used to destroy the world.

Asuka make peace with Yuriko as they cleared the misunderstanding which I was still disappointed that Yuriko was not made into a full antagonist for Asuka which will make the show more interesting but Toei wants to play safe. Minori and Sango got the shaft especially Sango which the poor girl got one episode dedicated to her before the final act and it was a bad one. Minori has confidence issues which they used an episode of recap just to fill in the blanks which are really lazy. (Don't get me started with Kururu as she is one of the most useless mascots in Precure who only get one moment to shine during the girls' trip to Grand Ocean)

It is also obvious that Bulter is the mastermind behind everything as we could see it a mile away. (Told you, the Bulter did it!) and the three generals are actually good people who are being misled. Poor Chogire who is turned into a Yaranade in the same episode. In the next episode, Cure Oasis will reveal to the girls what really happened between her and the Witch of Delay a thousand years ago which is really rushing everything before the final battle and finale.

That's my rant of Tropical Rouge. If you have really enjoyed this season so far, more power to you. But this season is not my cup of tea. Similar to Kamen Rider and Super Sentai, there's bound to be good seasons and bad seasons. If I am in the mood to do the finale of Tropical Rouge, I will post it again otherwise I will wait for Delicious Party Precure first episode on the 6th of February to post my review. Until then, take care and see you in the next post!