Happiness Charge Precure Ep 14: I like my Clams well done! Plus my thoughts of the Doki Doki Precure Movie! 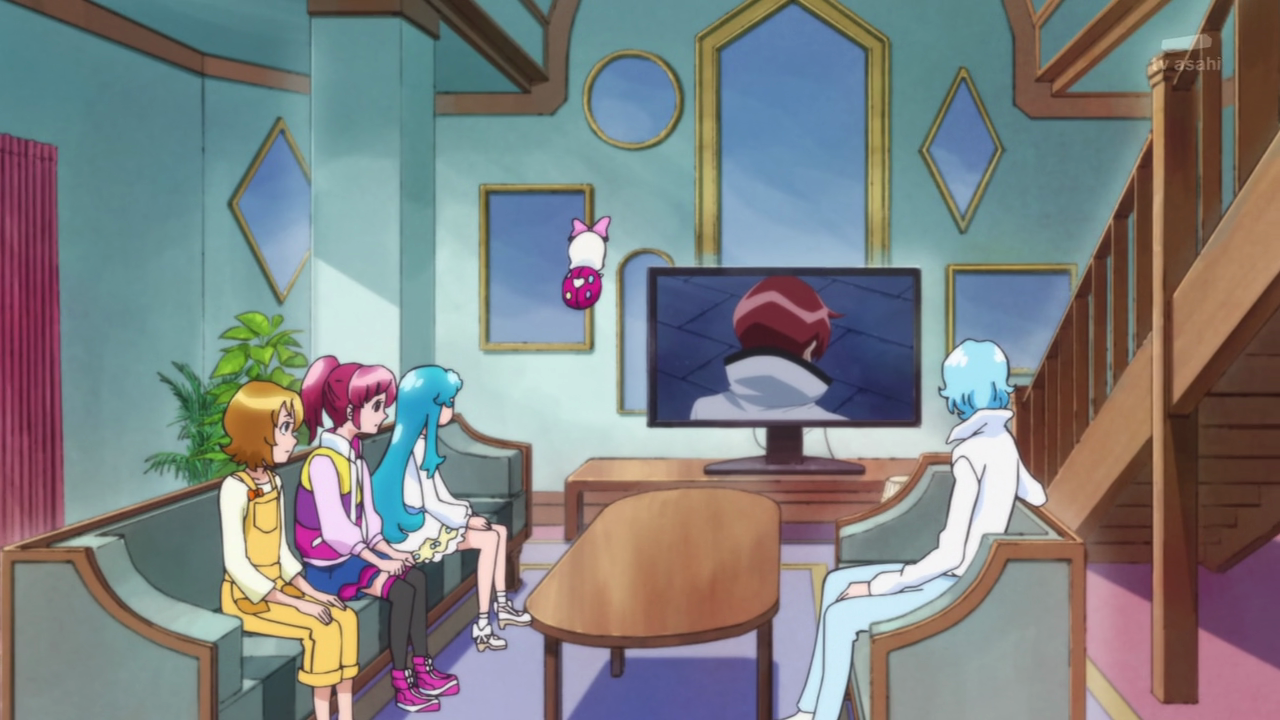 Precure Weekly host Mio reported of the different Precures around the world being defeated and sealed by Phantom. The girls were discussing of Megumi and Cure Fortune's encounter with Phantom and got worried.


Megumi tried to give a positive speech to make them feel better however she felt uneasy after Blue hugged her when he blamed himself for Cure Fortune's sister. Seiji called Megumi on the Cure Line and want them to help in bringing his sister, Mao's class for clams collection on the beach. 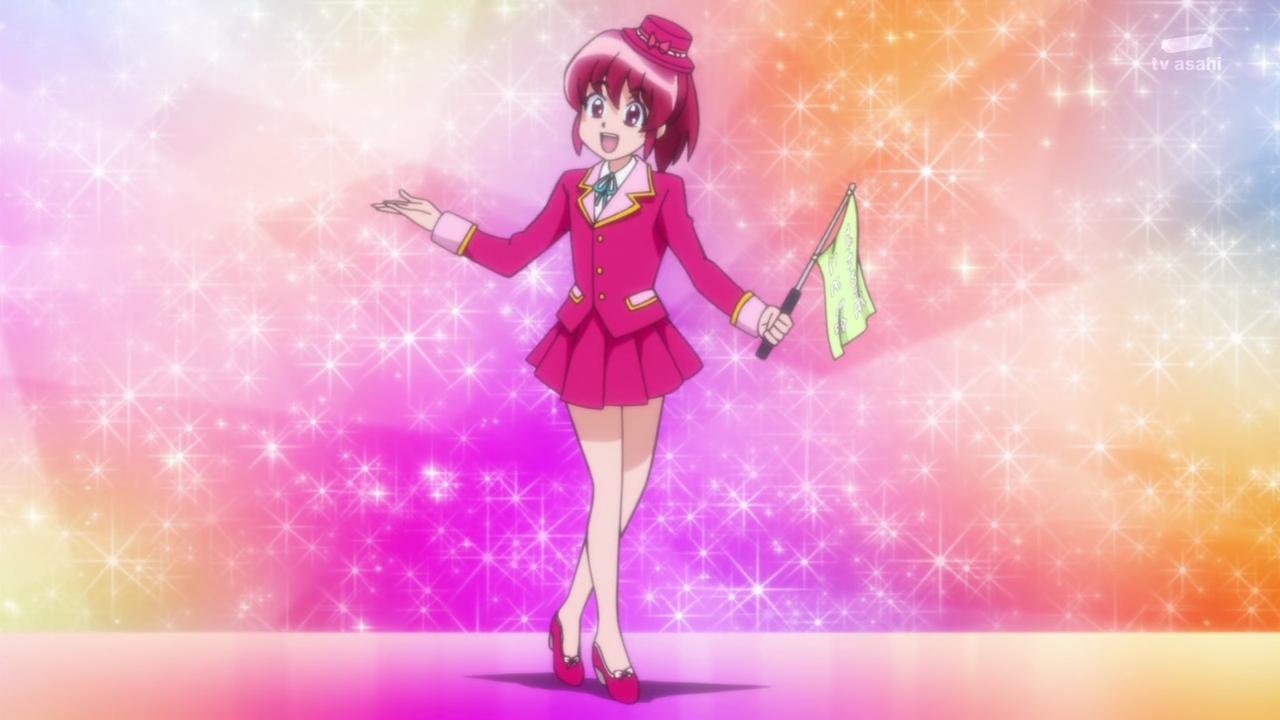 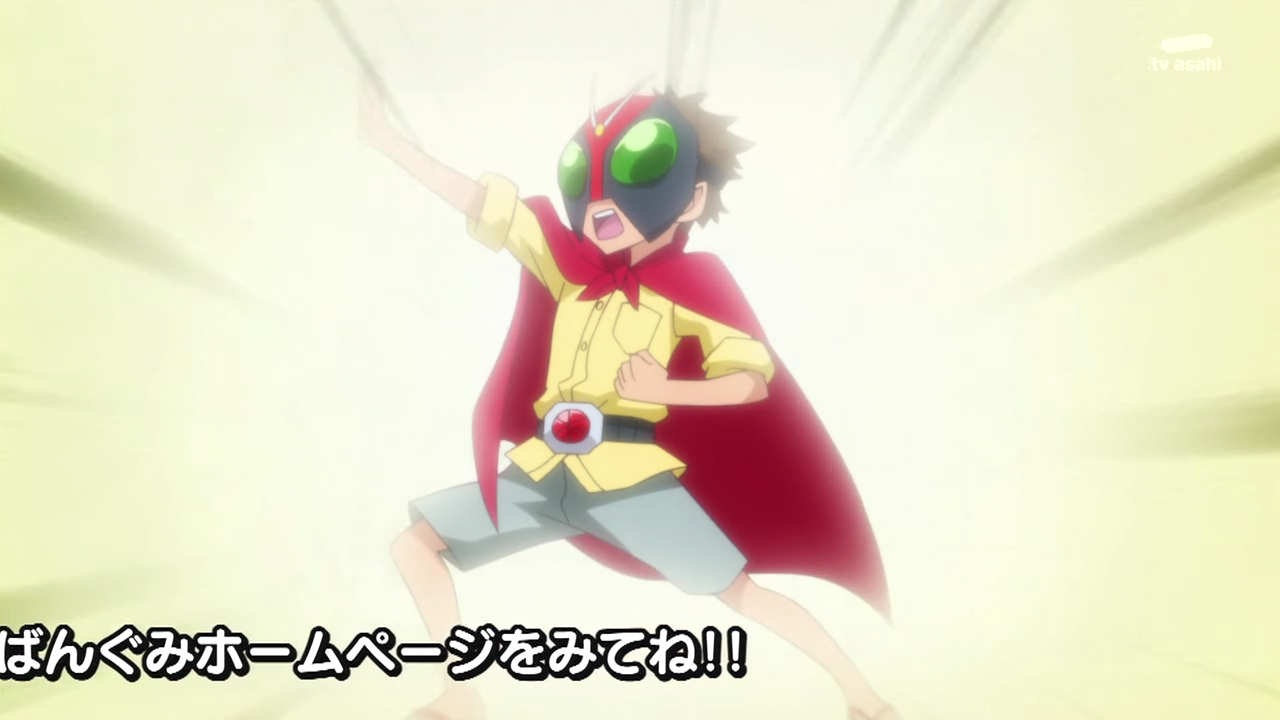 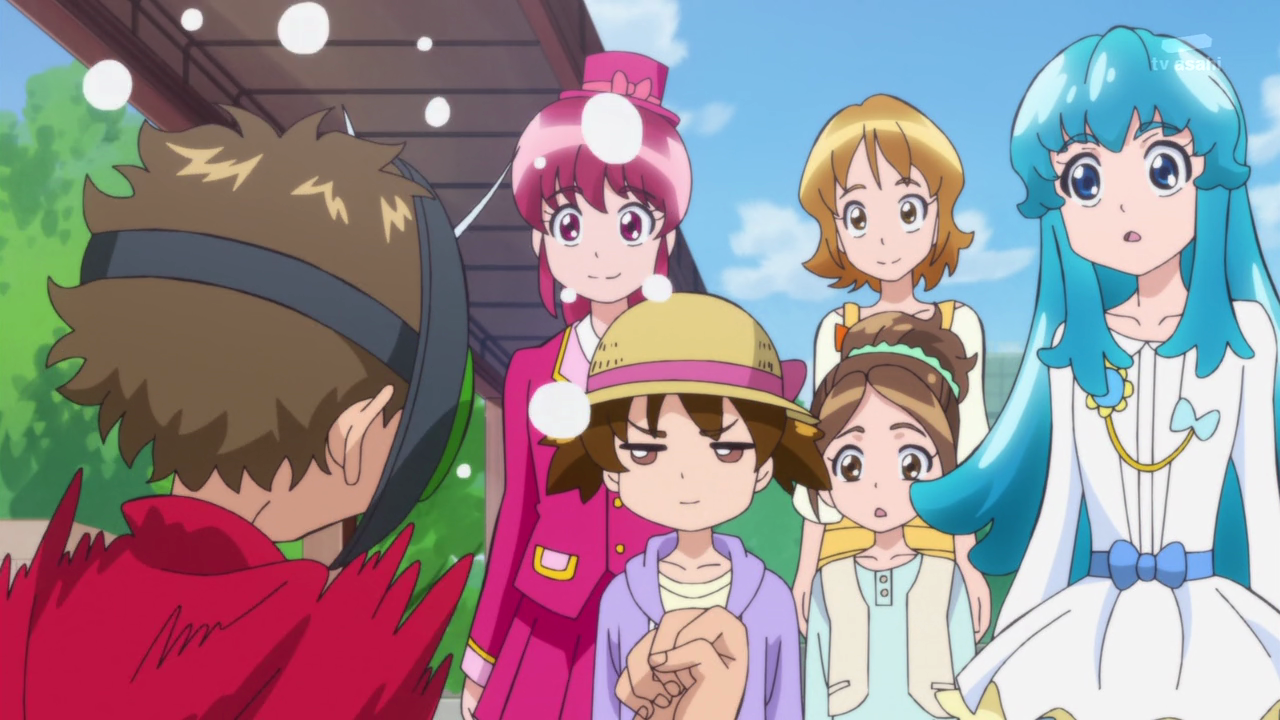 The next day, the girls arrived to get the children organised before getting onto the bus. Mao told Megumi that one of her classmate, Takuma has yet to arrive. Suddenly Takuma arrived in a Super Hero costume and call himself "Kamen Takuma." The girls played along with him which got Takuma more into character. 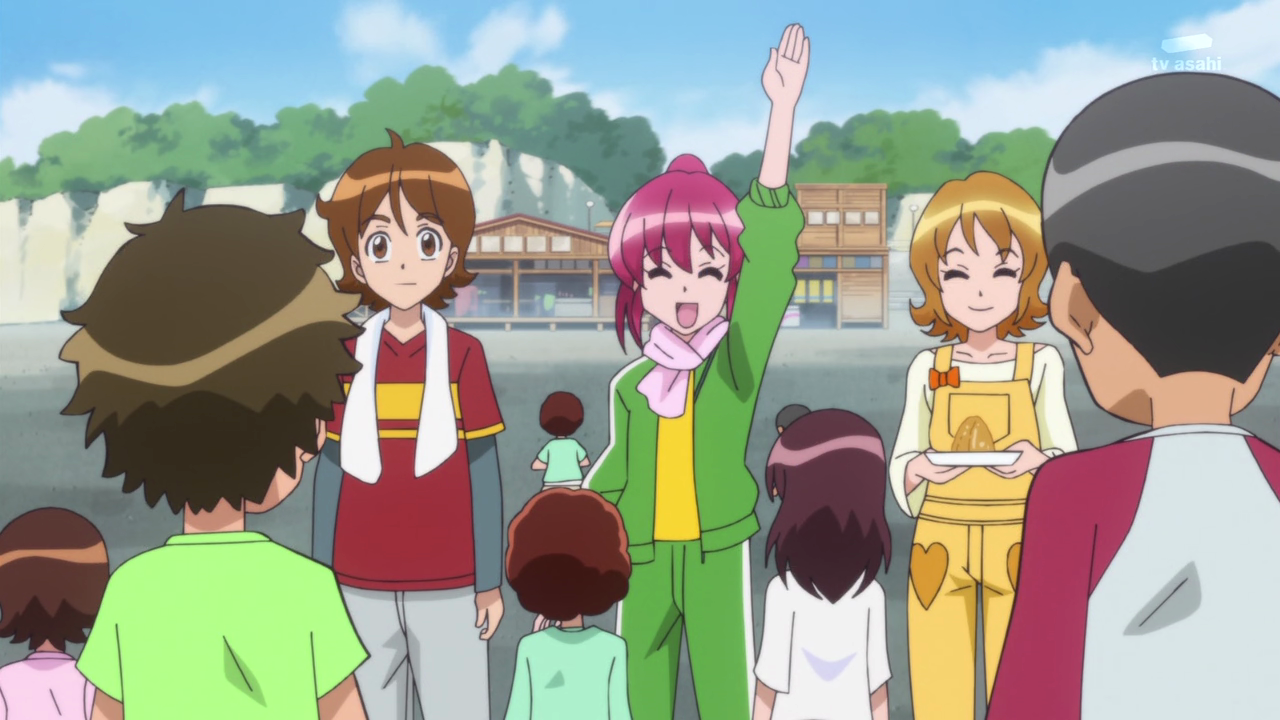 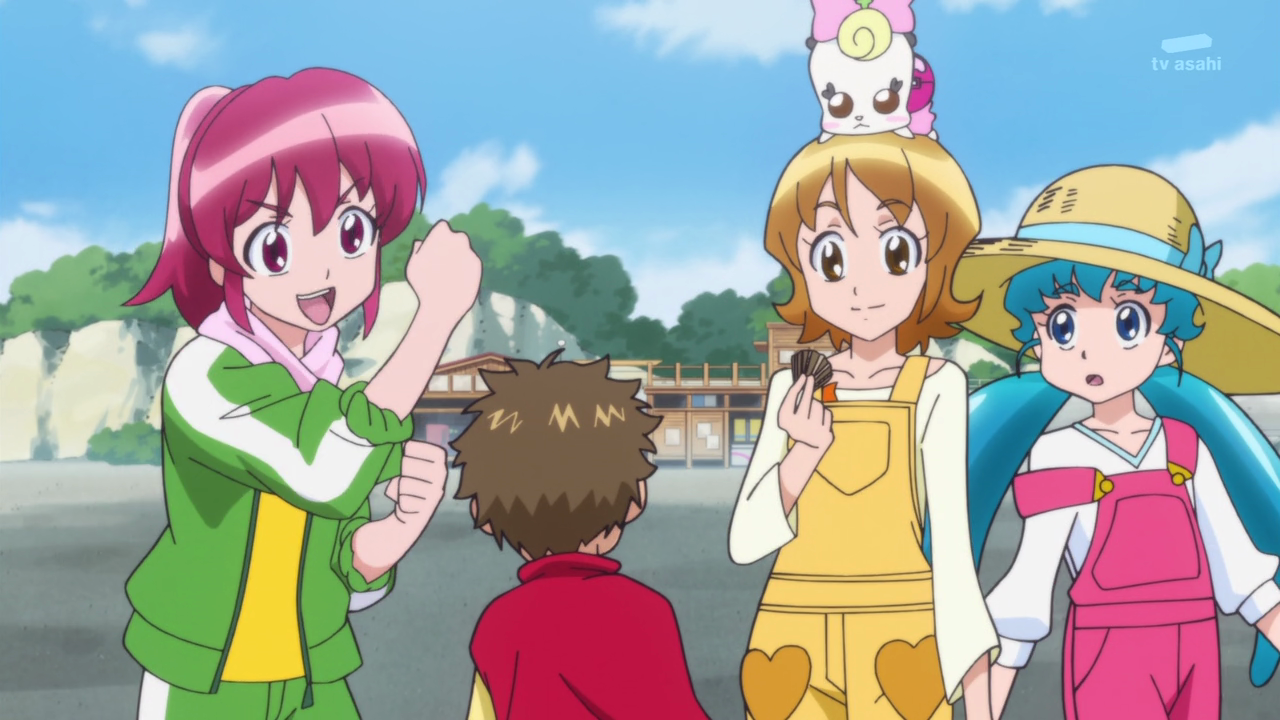 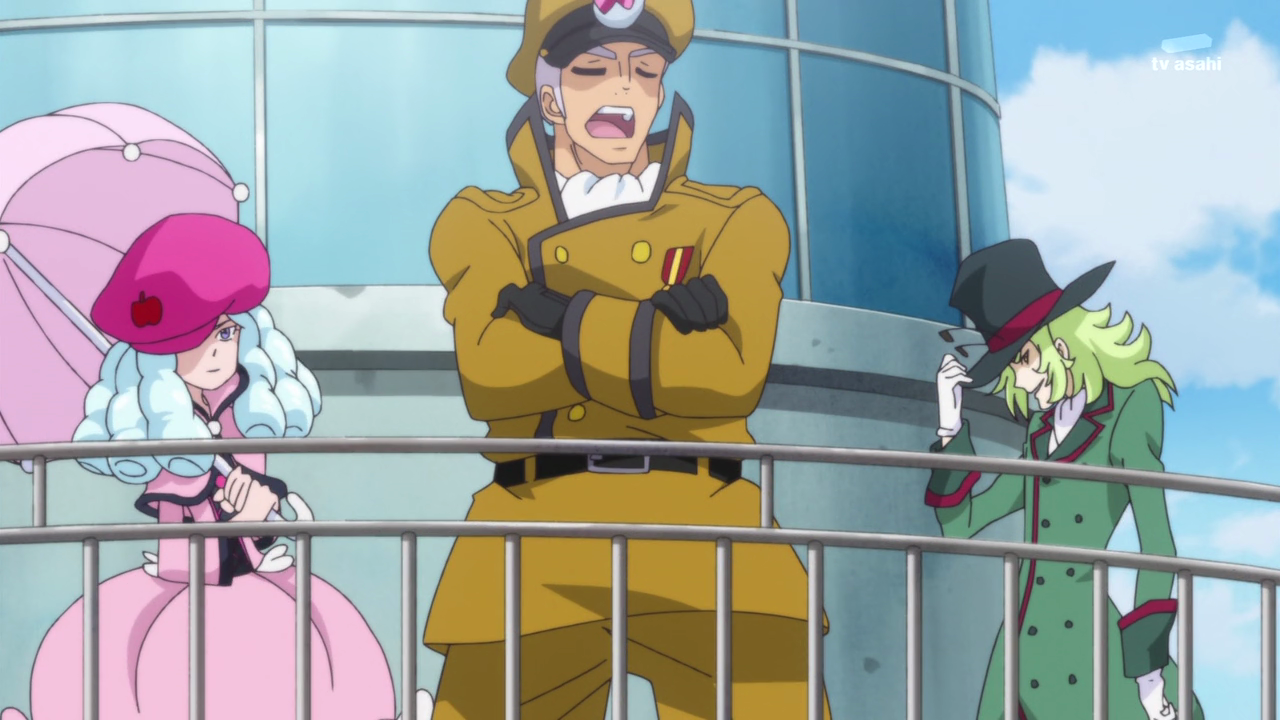 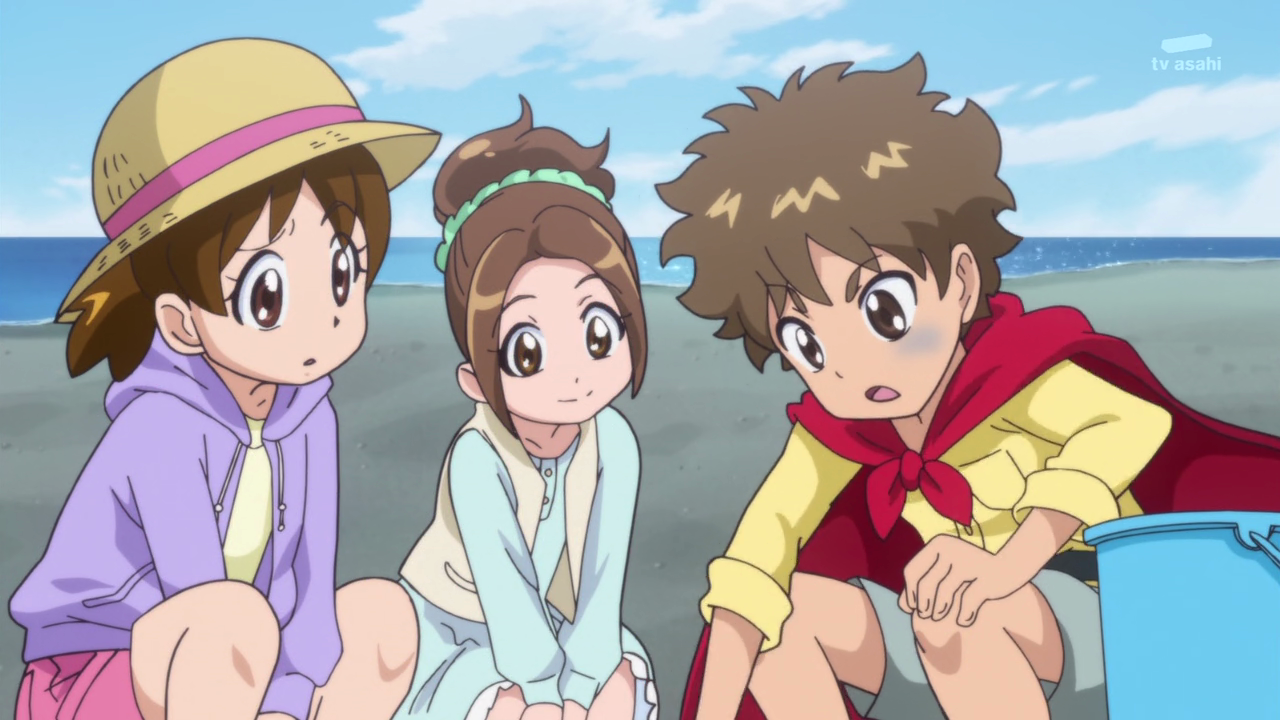 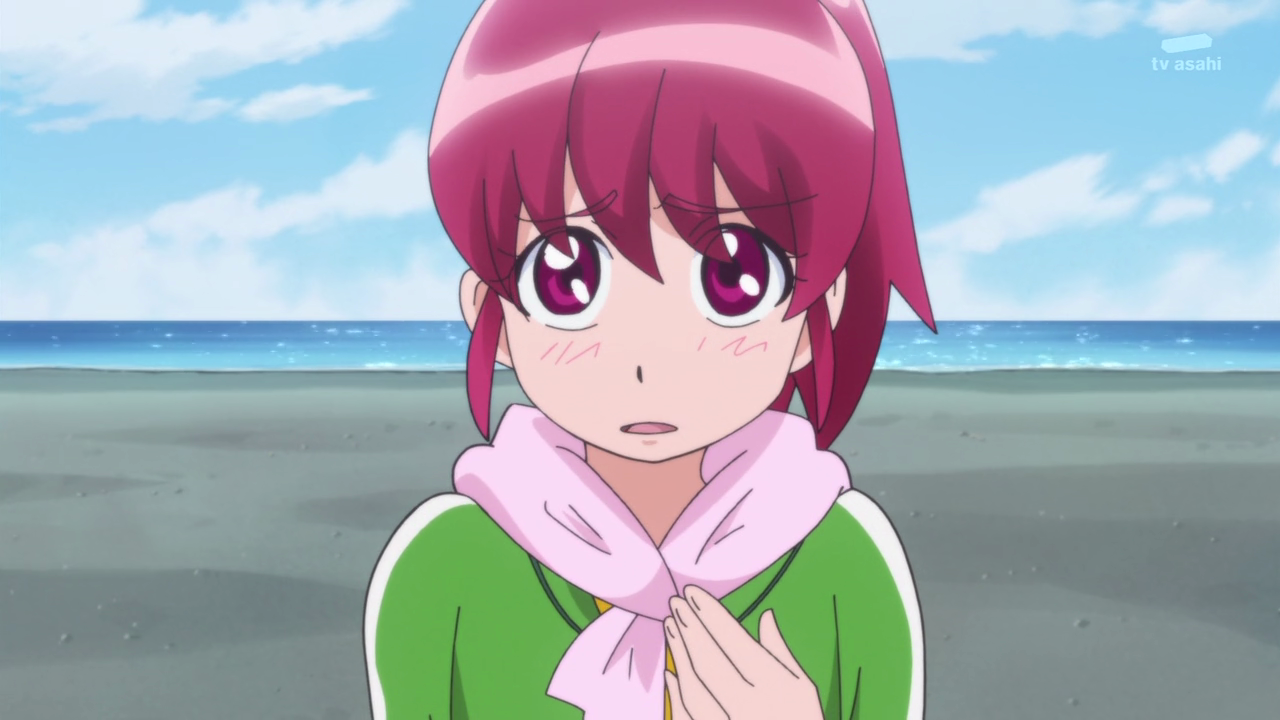 Meanwhile Oresuki and the other two generals were nearby and he volunteered himself to create trouble on the beach. Later Mao asked Takuma to help a fellow student Eri in getting some clams which he agreed. Megumi want to help him but Yuko adviced her to be more aware of love and hate. (I am not really sure if that is what Yuko meant) Megumi started thinking of Blue hugging her which got her worried again. 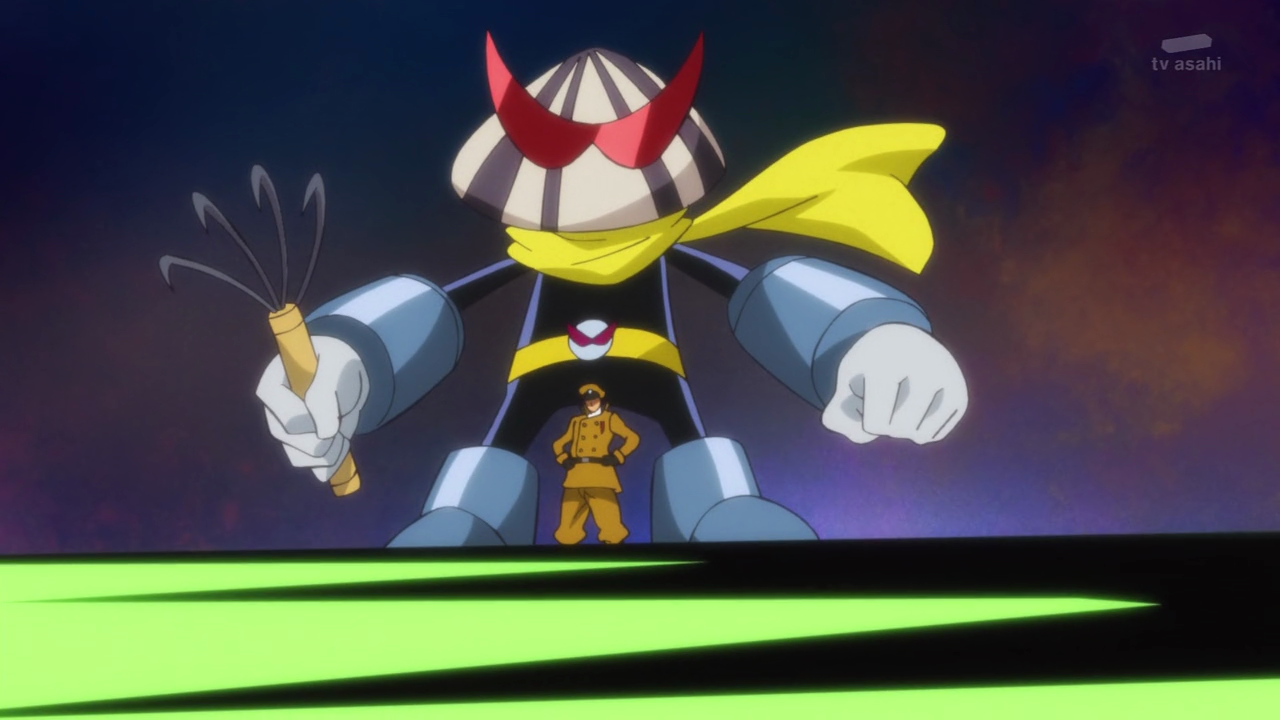 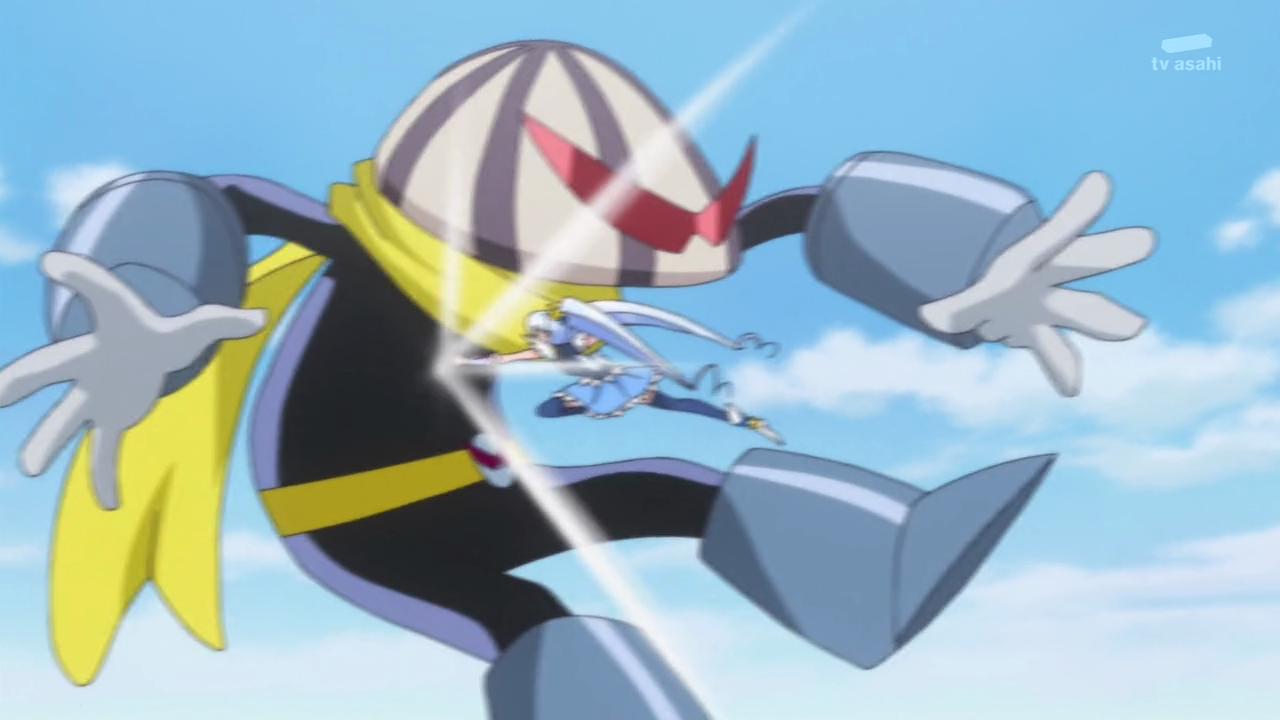 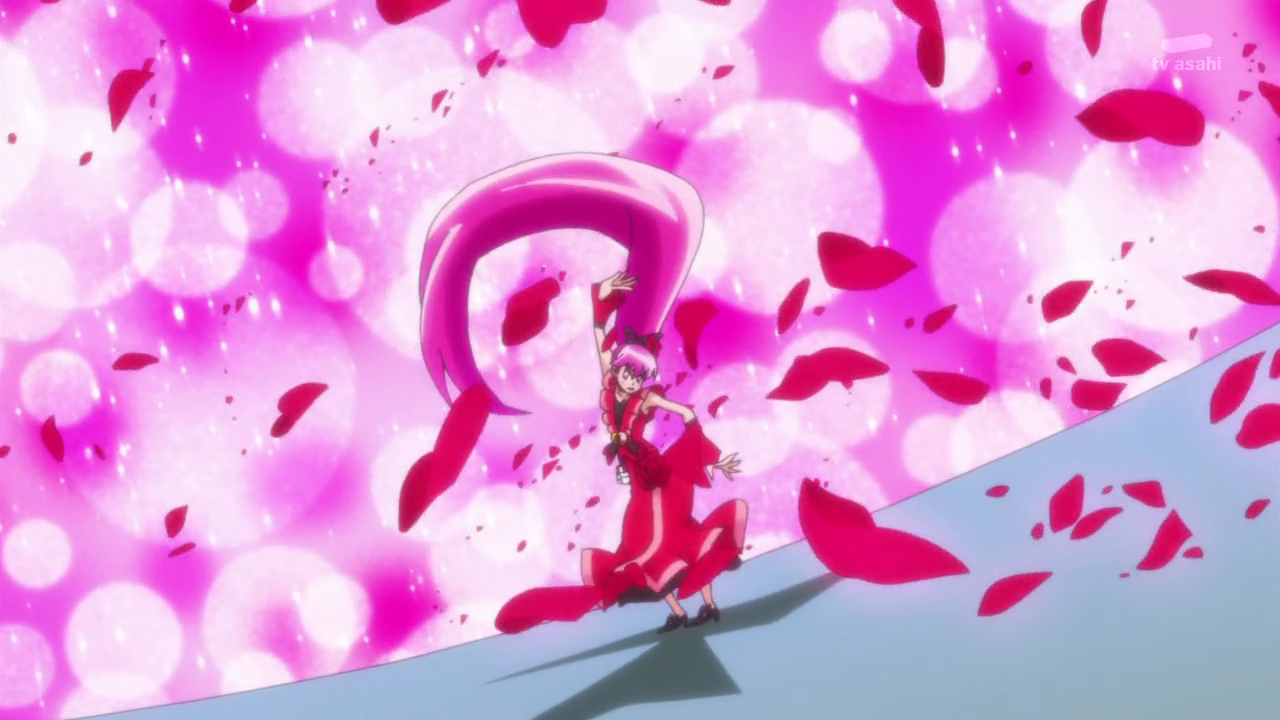 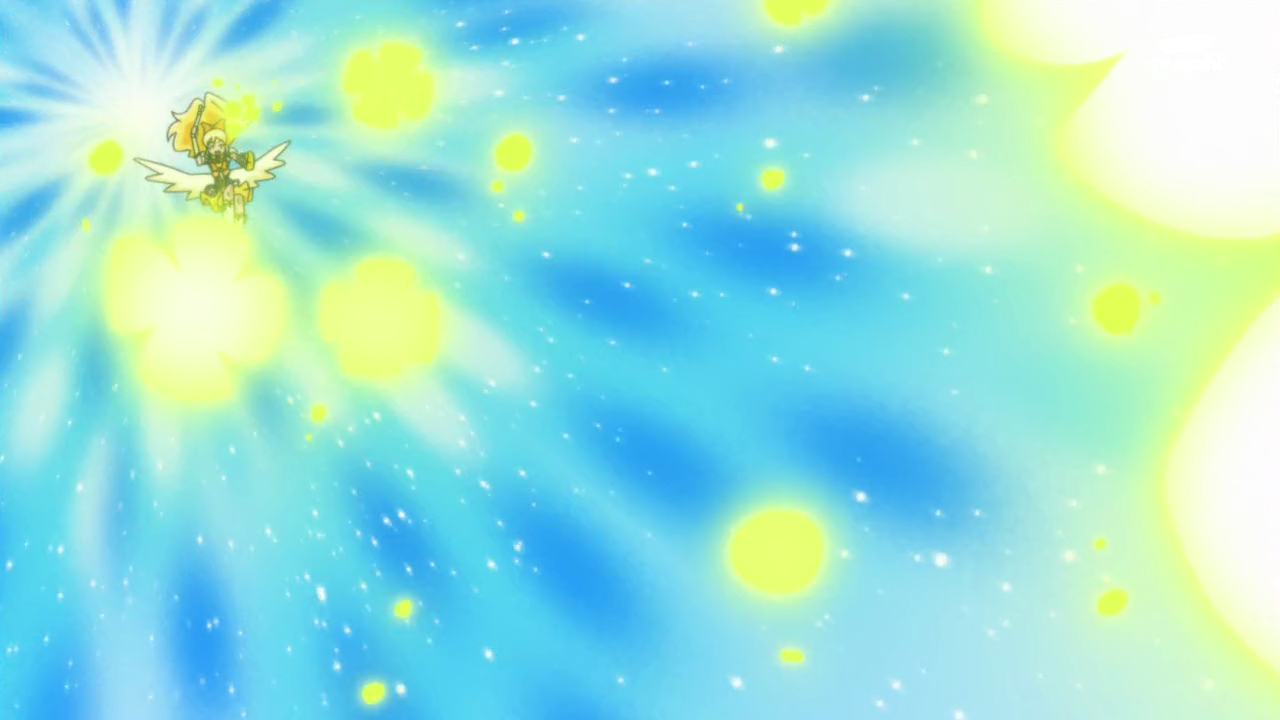 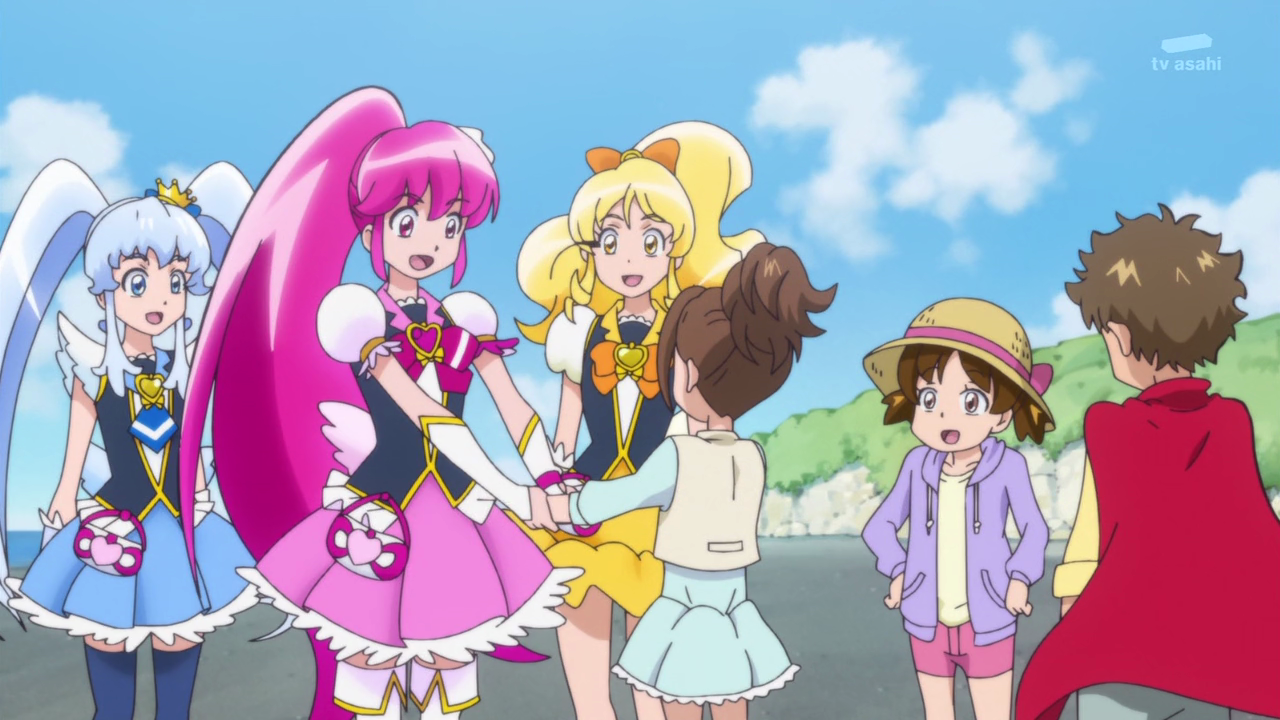 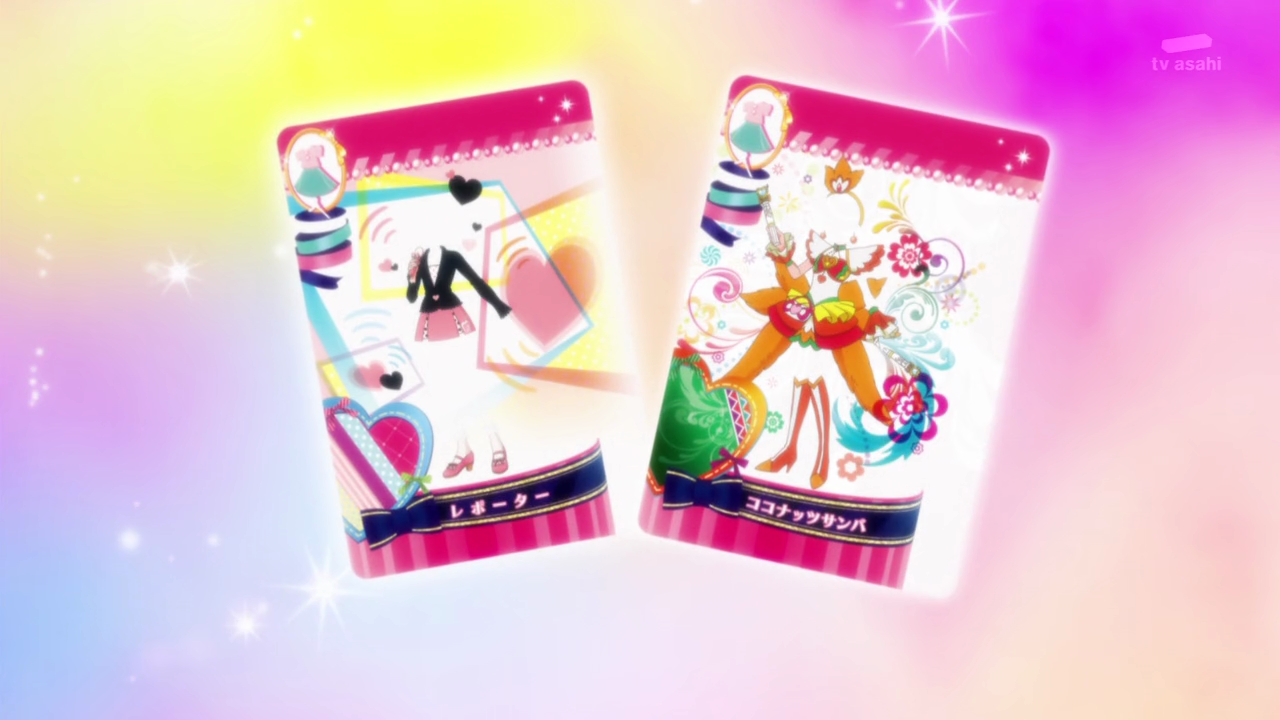 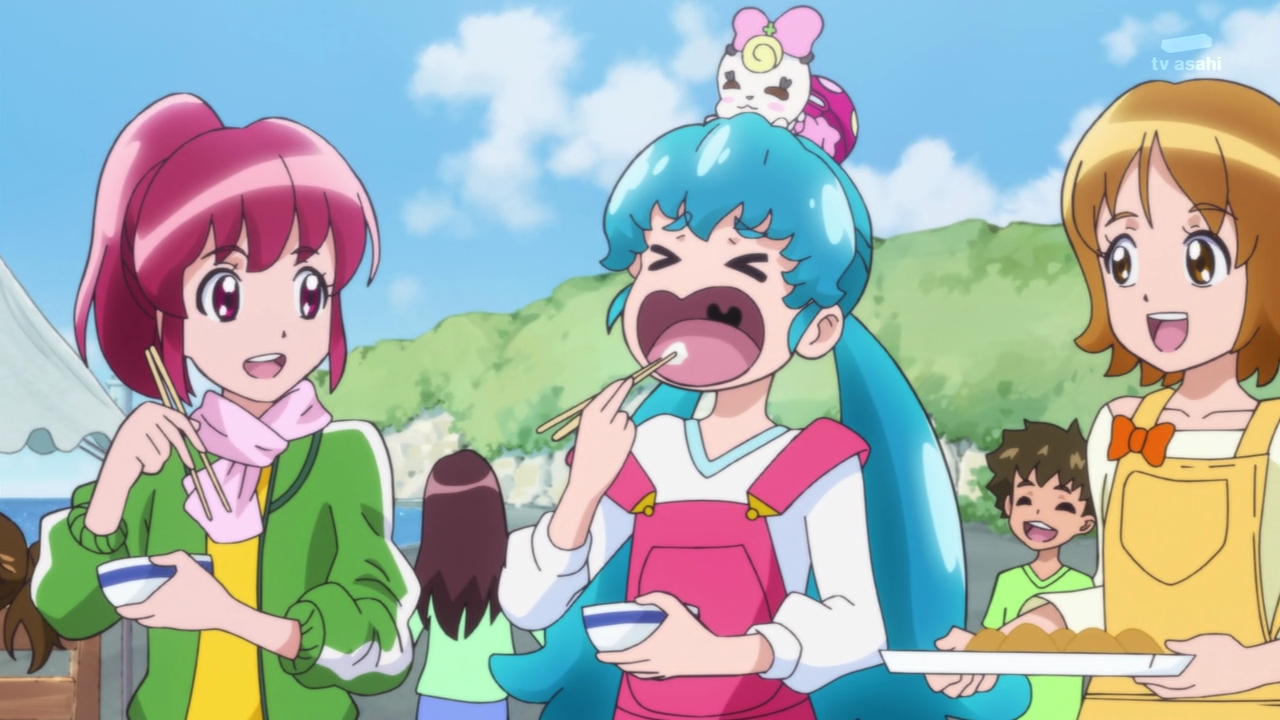 After rescuing the children, the Precures praise Takuma for being a hero and flew off. Mao and Eri also thank him for trying to protect them which make him more motivated. The girls transformed back and Ribbon got two new PreCards for their efforts. After that, everyone sat down to have cooked clams for lunch...

Although this episode felt like a filler however it is foreshadowing to several things. Phantom is still hunting the Precures around the world which mean our main Precures team will be facing him very soon. Next is something that I fear is that Megumi might have feelings for Blue and might do something foolish that will jeopardise everyone.

The Saiark is probably the weakest since the girls keep pounding it endlessly with their powers. We also see that Cherry Flamenco has other attacks that can help which mean the other form changes might have too in the future. 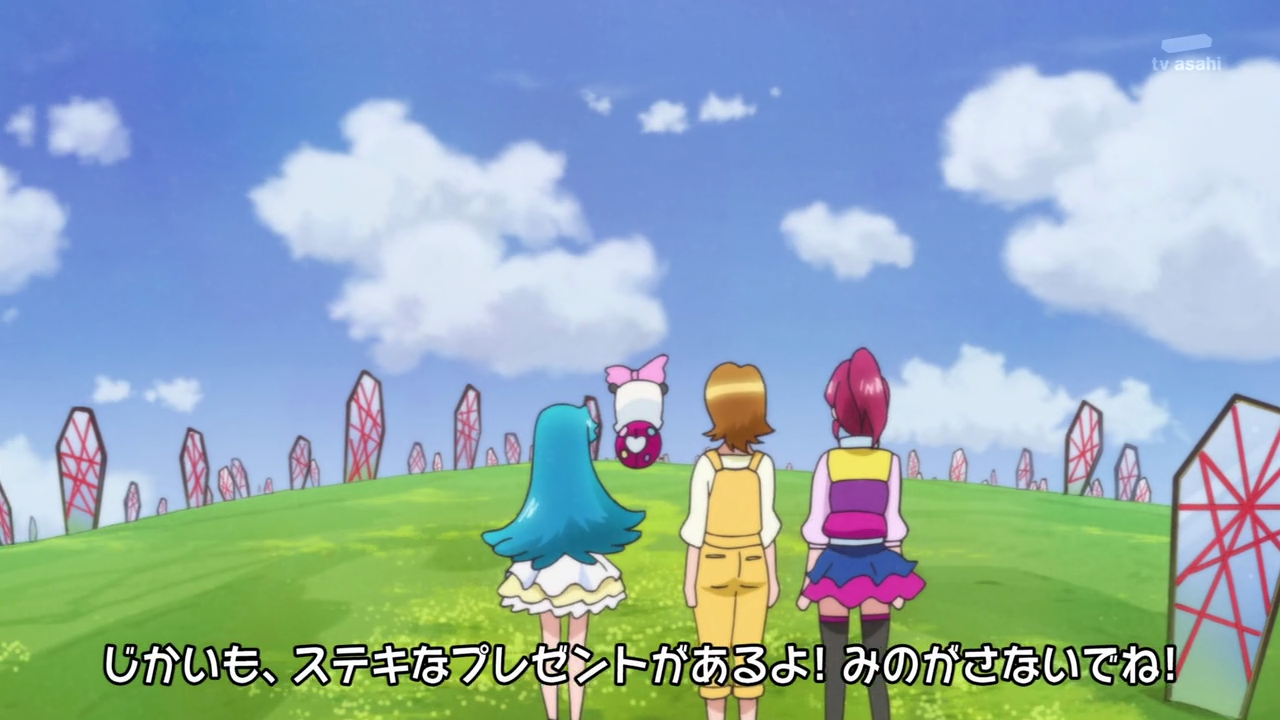 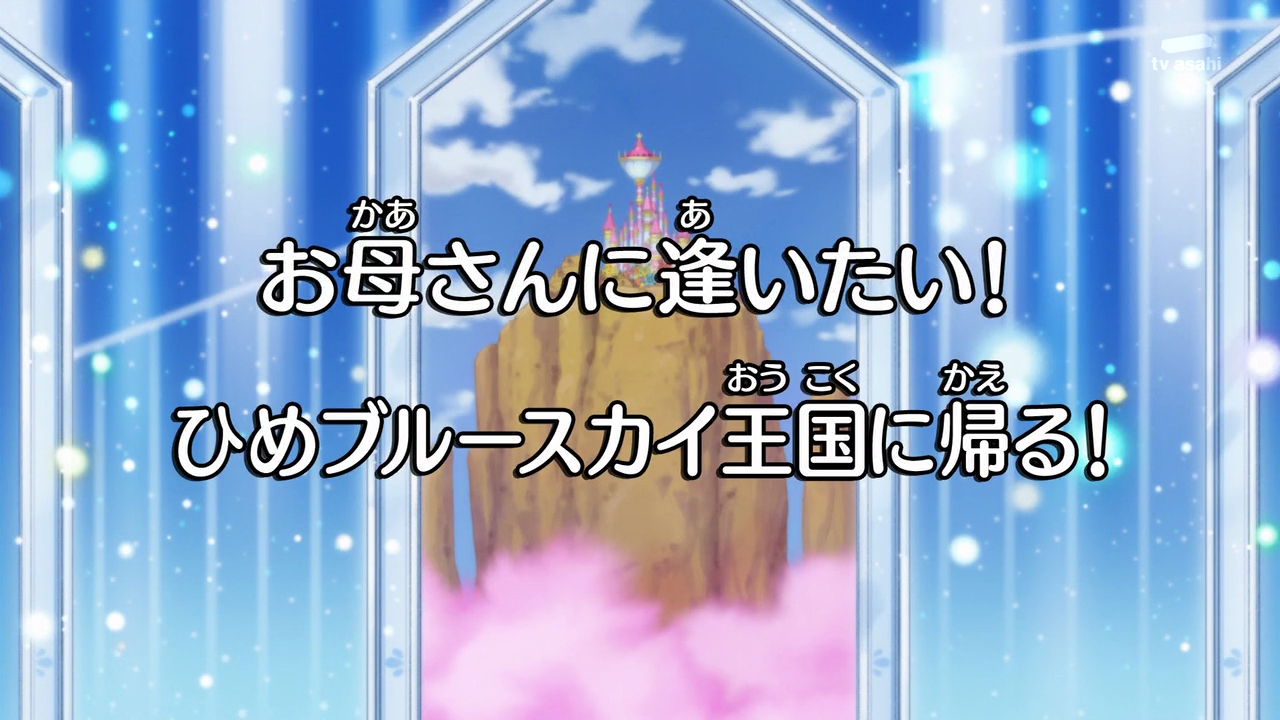 Other than that, it is just a warm up episode as next week is the Mother's Day episode. The girls travel to the fallen Blue Sky Kingdom and Hime returned to her kingdom to see her sealed parents. Until then, see you next week!

P.S: Congratulation to the Precure series for reaching the 500 episode after ten years and we have our four current Precures to wish well. Let's make it a 1000 episode in the next ten years like how Kamen Rider did it for their 40th anniversary! 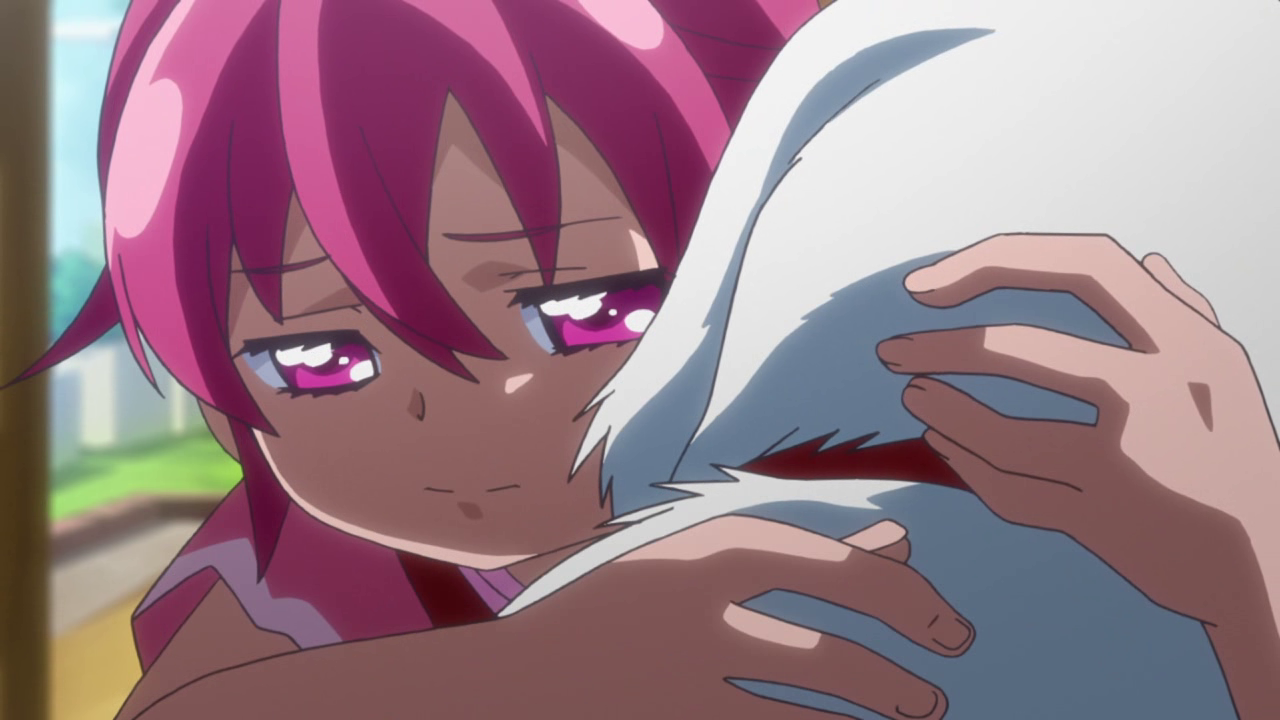 I have already watched the Doki Doki Precure Movie and here is my short review about it. Again this movie focused on Mana and her relationship with her late grandmother and a pet dog, Mallow who is no more with her. When a mysterious masked figure started abducting everyone in the town including the girls, they are trapped in the past, reliving their lives. A white spirit mascot appeared in front of Sharuru and the others and they raced against time to save the girls. But Mana choose to stay in the past after experiencing the loss of her pet dog and is worried that she can't accept her grandmother's death...

The story felt similar to Fresh Precure's movie about how people threw their discard toys and the toys took revenge but this one is more personal since the main villain manipulate one of the movie characters into abducting the girls. We get to see a more fragile side of Mana as she experience death and loss. Although in the end, someone close to her told her it is all right to cry out and move on because that is life which is all right. Furthermore, this movie is slightly dark as there is blood in one scene and talking about death in another.

Overall, it is a pretty decent movie if you like Mana because it is her movie. Toei, can we have the next Precure Movie not to focus on the Pink Precure and stop using that stupid miracle light gimmick? Because it is predictable that the miracle light saved the day again and the main Pink Precure got all the best power up.
Posted by Kragito at 7:42 PM