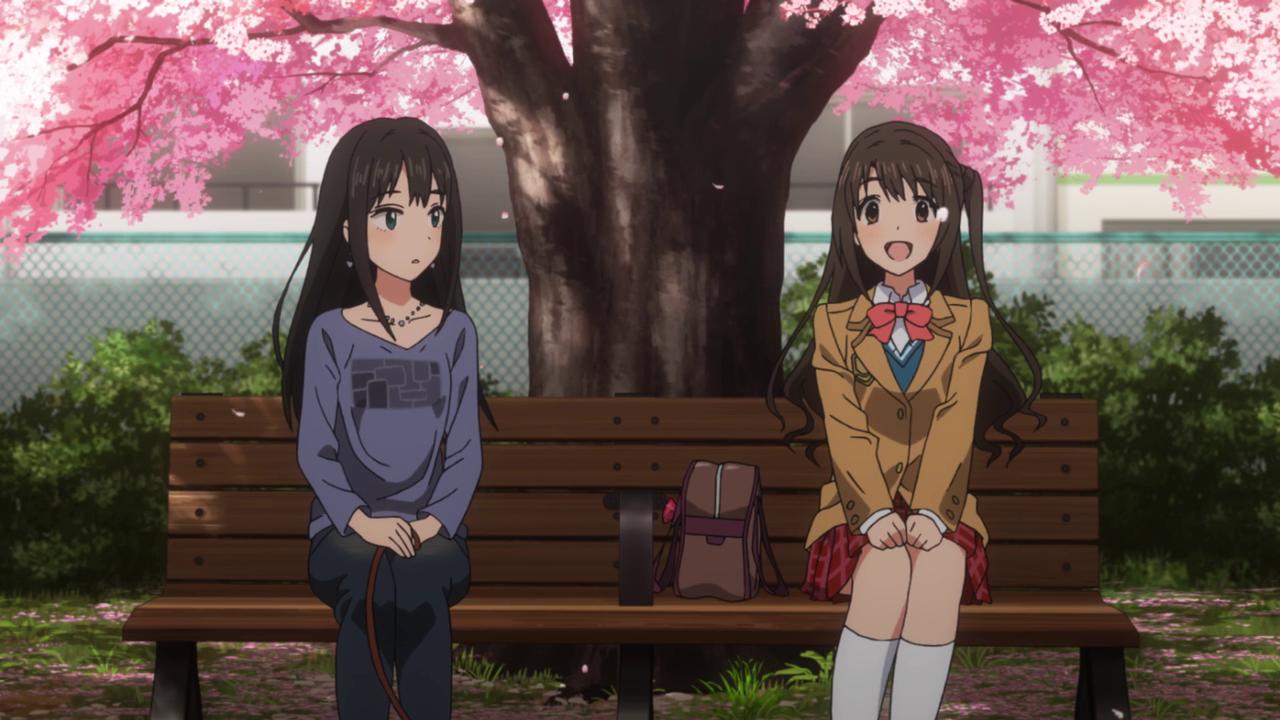 Idolmaster Cinderella Girls Ep 1: Idols are now the talk of the city and ever since 756 Pro took the city by storm, girls dreamt of a Cinderella fairy tale to become Idols are appearing everywhere. Shimamura Uzuki who failed the Cinderella Idols audition previously was offered by a producer, Takeuchi (I am using his seiyuu's first name since he doesn't have an actual name in the show) to be an Idol in 346 Pro. 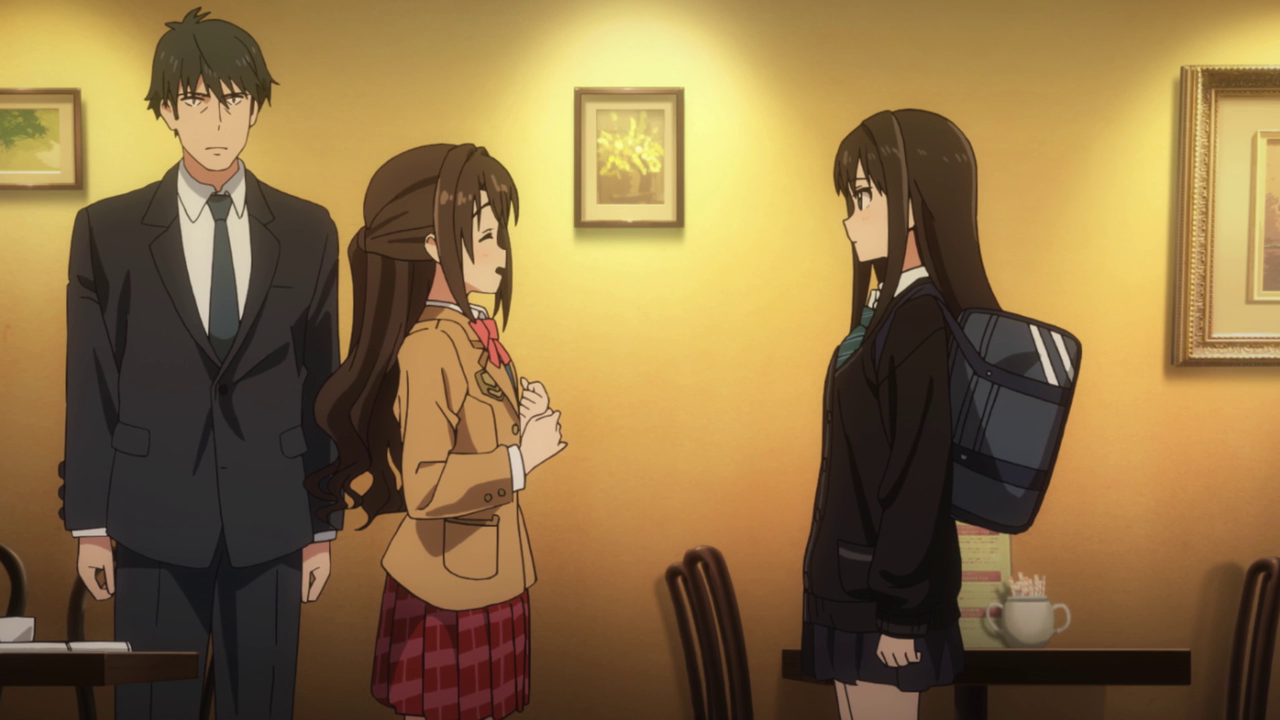 Uzuki took the offer immediately but learned she is unable to debut until more girls joined the unit. Takeuchi spotted a high school girl, Shibuya Rin and immediately approach her to be an Idol. She rejected him several times but he was persistent. Uzuki decided to tag along and remember Rin working in a flower shop. 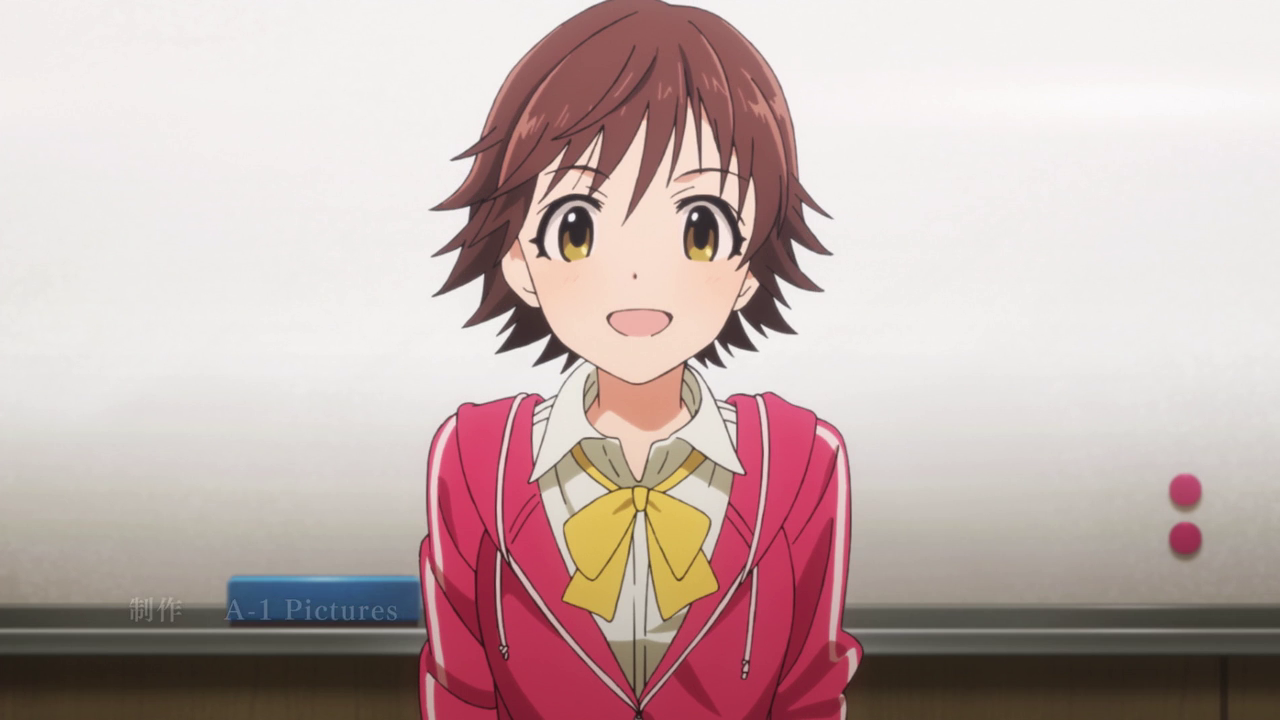 After some talking and Rin has no commitment in life, she decided to take the offer and became the second member of the unit. At the same time, Honda Mio is auditioning at the Cinderella Idols...

So one of the most anticipated shows this season and I am already enjoying more than the first episode of the original Idolmaster series. You can already spotted many Easter eggs in the first episode like the 756 Pro poster, Jupiter group poster and even Takane's police uniform picture in a police station. Uzuki played a more spunky Haruka and I already like her positive attitude despite all the setbacks she had in the past. Rin played a least depressing Chihaya with her cool girl attitude. Only when Uzuki make a fool of herself, she crack a smile and it is probably what Takeuchi find her appealing.

Takeuchi played the monotone straight guy with a face that will scared girls and children alike. A complete 180 difference than Akabane from the original series but yet, he won't take no for an answer and persistent. (Clearly stalking Rin at school and at work!) With two girls in the group and look like we are getting another six more girls from the promo with Mio playing the energetic girl as shown at the end of the episode. Can't wait to see more in the next episode! 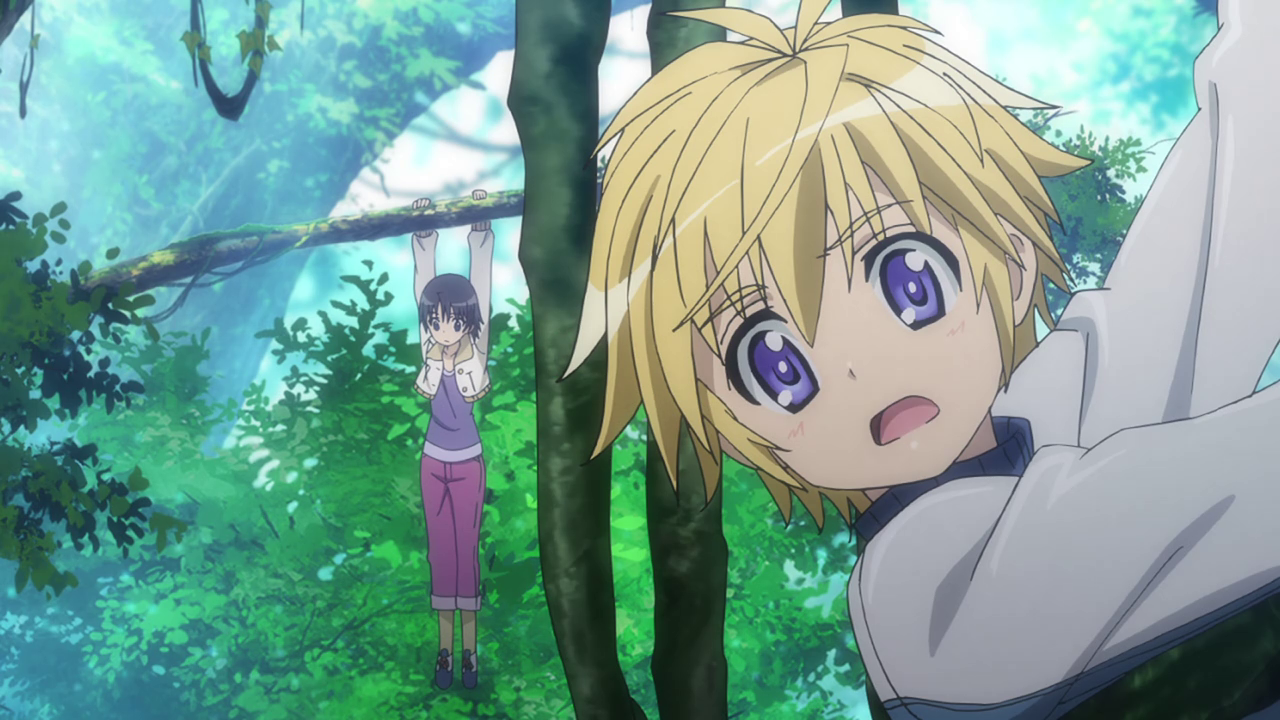 Dog Days S3 Ep 1: Shinku and Nanami are competing in the Iron Athlete finals and both were tied for first place. At the same time in Japan, Becky is preparing herself to meet her friends in Floyard. She was transported first and meet Couver again. Shinku and Nanami are rushing to Floyard where a lighting bolt interrupted the transportation. 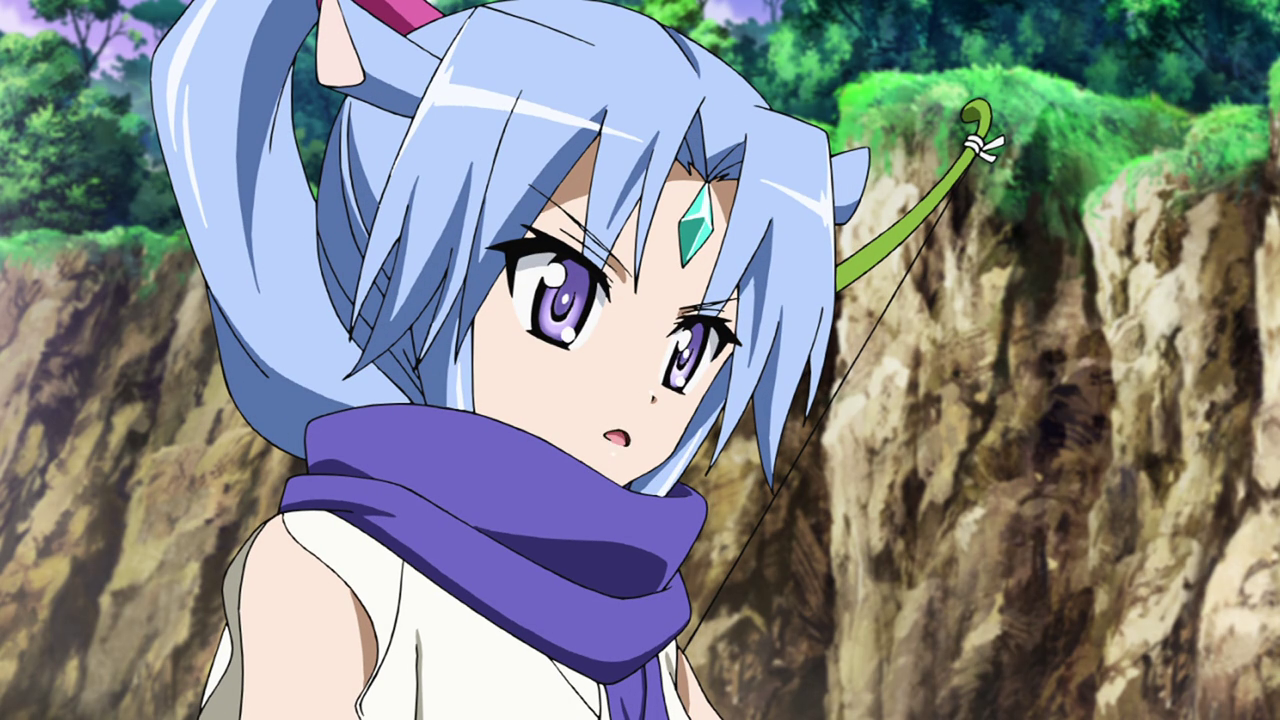 The two of them landed in a forest and lose their luggage. Millhiore and Leon realised they didn't arrive and prepare search parties to find them. Shinku and Nanami were chased by large dinosaurs creatures and giant fruits when they were rescued by a native named Shuru. The two of them tried to convince her that they are heroes but she doubted them. 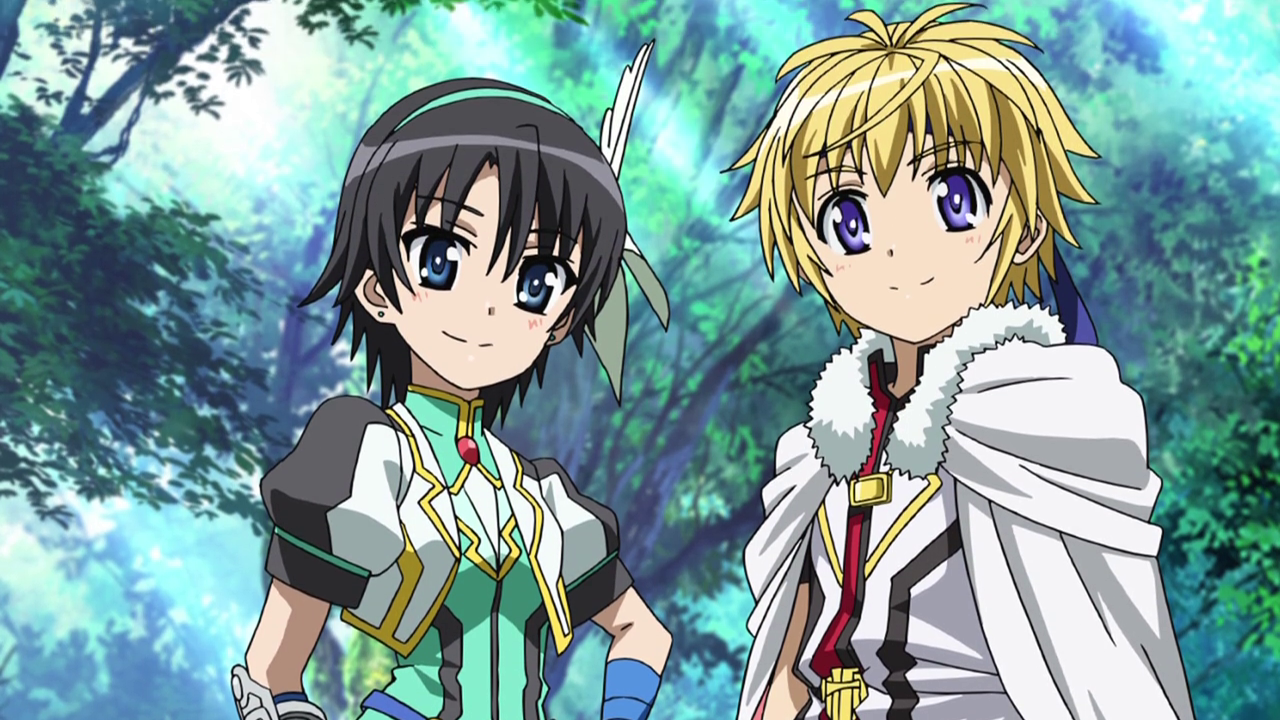 They later found their luggage but Shuru sensed an evil presence in the forest and told them to stay here. Shuru tried to stop some demon creatures from hurting a baby dinosaur when Shinku and Nanami arrived to save her in their combat gear...

After the previous season's disappointing storyline, I will said this opening episode get me more excited and intrigued. There is now an evil presence that is turning animals into demons and Shuru is probably a central character in this story. Shinku and Nanami still kick ass (Leon is still my favourite!) and look like the rest of the cast will meet them in the next episode. But for now, welcome back to Floyard!

P.S: The rest of the shows below are my first impressions about it. I might or might not continue to review these shows on a weekly basics but if you have any series you might want me to review, please leave a comment in the comment sections. 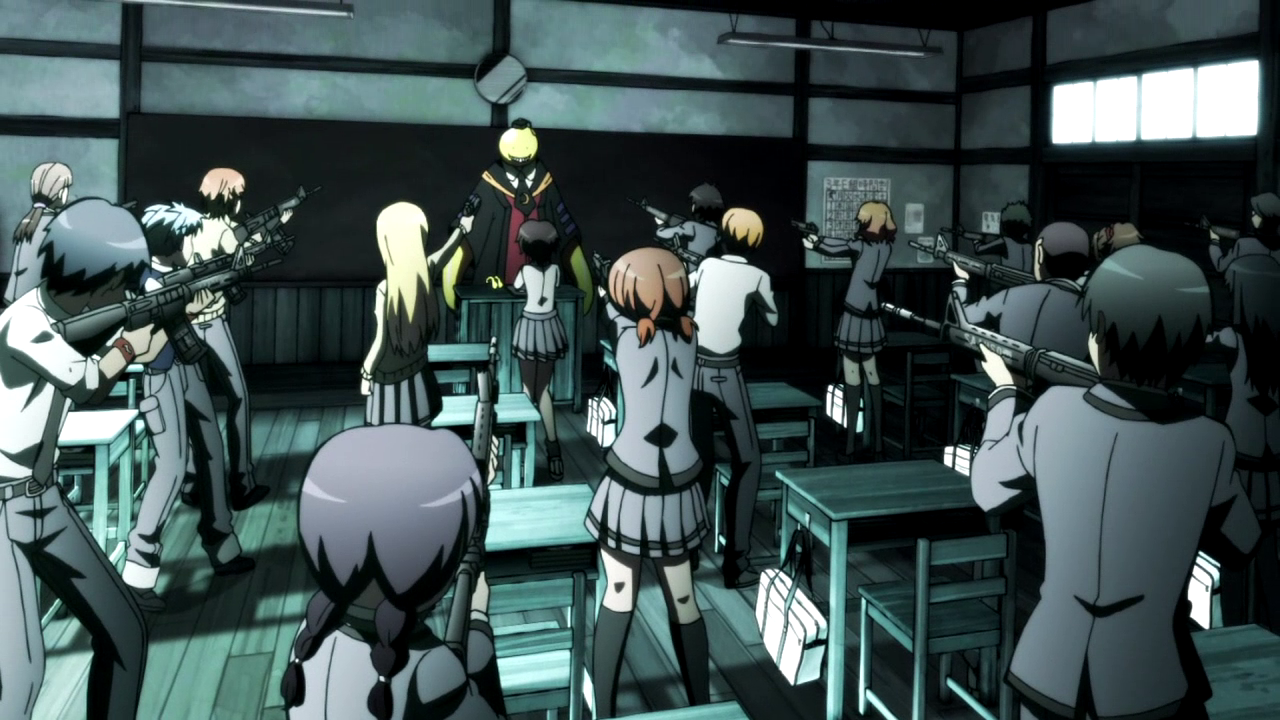 Assassination Classroom Ep 1: A mysterious being that resembles an octopus blew up half the moon and claimed he will do the same to Earth in one year time. However he claimed if anyone could hurt him before the deadline, he will not destroy the Earth and during this time, he is to be the form teacher for Class 3-E. Thus the class of 3-E of a school was assigned by the government to kill the Alien being which the students named him Koro Sensei. In the meantime, he will teach the class of 3-E to be better students and he is pretty good in his teaching and do care for his students...

It might have one of the most silliest plots in Shouen manga history but yet Koro Sensei is voted one of the best manga teachers since his debut. The class of 3-E has your usual anime types like the normal kid, the plucky girl, the nerd, the fat kid, the hot chick and the bully. The government offered the students ten billion yen to however can kill Koro Sensei and already in the first episode, some bullies threaten one of the classmates, Nagisa to become a suicide bomber to kill Koro Sensei. However Koro Sensei saved Nagisa's life and threaten everyone that he will kill their families and friends if they pull such a stunt again.

You might think Koro Sensei is ruthless but yet in a flashback, his real form which looked like a creature from Cthulhu failed to save a woman and make him promise to take care of her students when she is gone. Furthermore, the students suffered from low esteem as they are the worst class in the school and their classroom is isolated on a hill away from the main school. In another way, the show is like GTO with tentacles!


Maria the Virgin Witch Ep 1: During the hundred year war between England and France, Maria who is a real witch sort out to end the war from both sides with her magic. However she is still a virgin and yet to grasp anything about "adult situations." After learning that a village girl's father and a young man were drafted into the French army, she step into the battlefield and called out a dragon from a cauldron (how did it fit in there? Magic of course!) and saved the two men's lives. At the end of the episode, she even claimed she doesn't mind to offer her virginity to anyone but yet she couldn't figure out from her succubus, Artemis what is a "mouth massage..."

The hundred year war is one of the darkest time for both countries and the churches claimed that witches are evil and burned Maria's idol, Joan of Arc on a stack. However she continued to help others as a hermit and once a while, stopped a battle from both sides. Although we yet to find out what is the consequences for interfering the wars, the gods claimed they are not happy with Maria and it is going to bite back at her. An interesting start so far but need to watch a few more episodes... 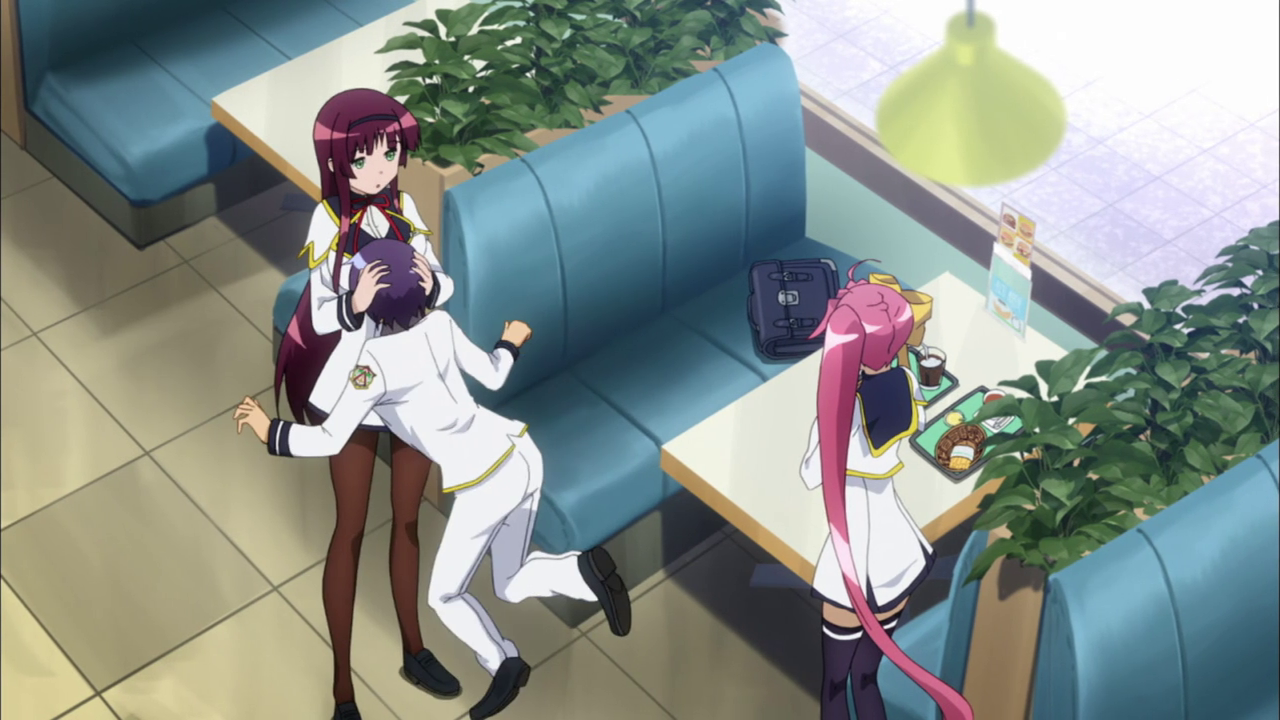 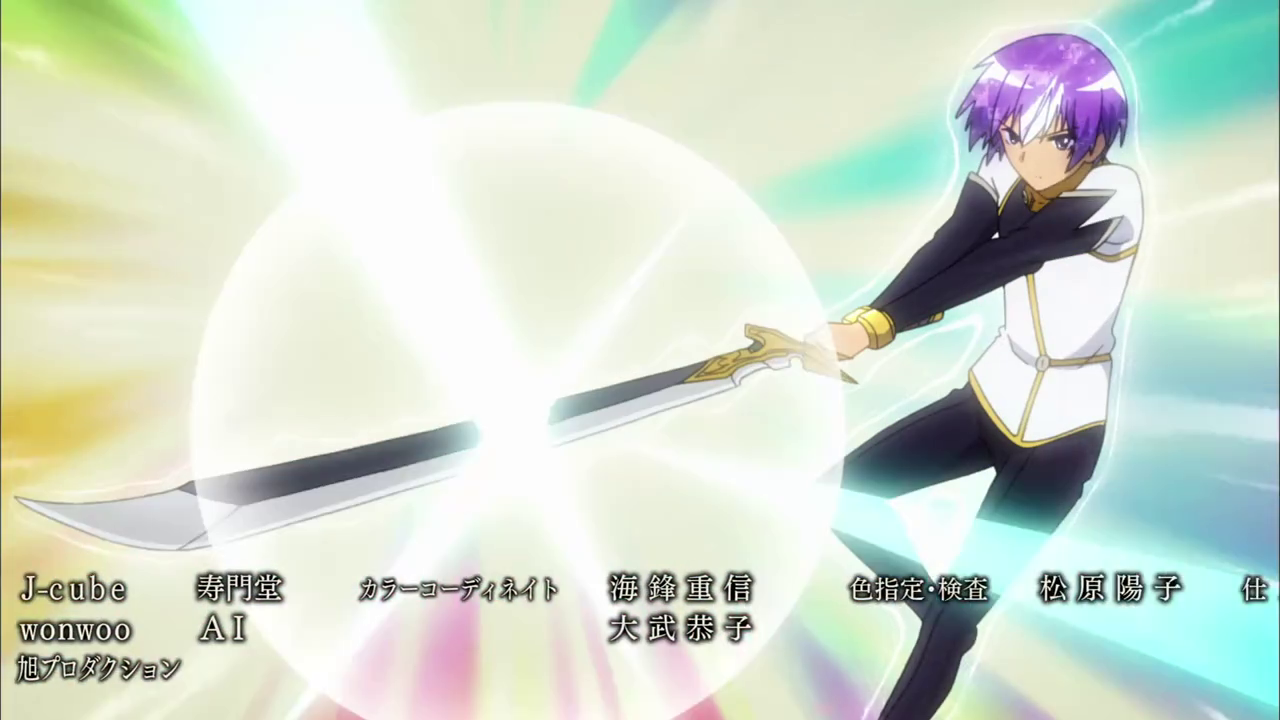 Seiken Tsukai no World Break Ep 1: Momoharu was enrolled as he has powers from two past lives he had. One as a knight with Satuski and another as a ninja with Shizuno. However he did not know how to use his powers until a bully who humiliate Satsuki force him to reveal it and the rest they say is history...

Already the show fall for the usual shouen fantasy/harem cliques. Momoharu had two girls hounding him-Satsuki who has a serious brotherly love complex with a flat chest board and Shizuno whose monotone voice and hot body complete the triangle. Momoharu himself is the standard hero lead who wait till his life is in danger and reveal his power at the last moment which is pretty cliques to the last thirty shows that had the same moments. Overall, if you want to watch this show just to kill some time, go ahead but there are better shows with a much better harem male lead. 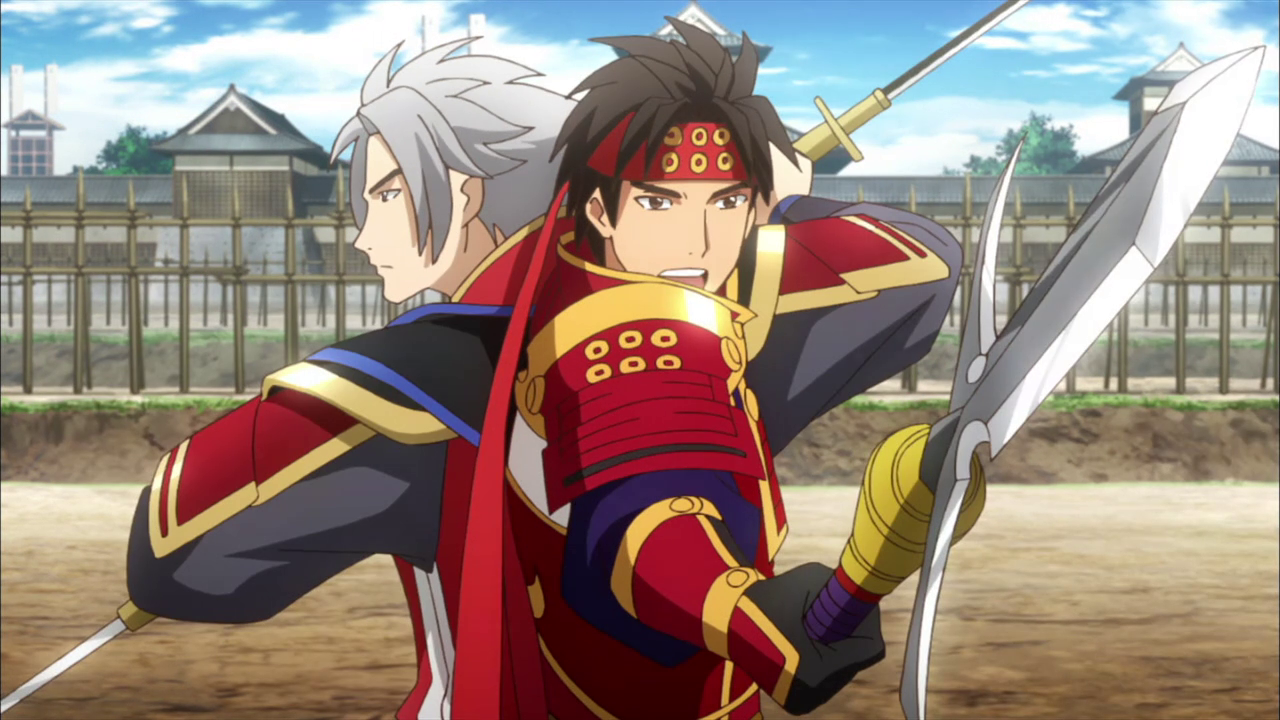 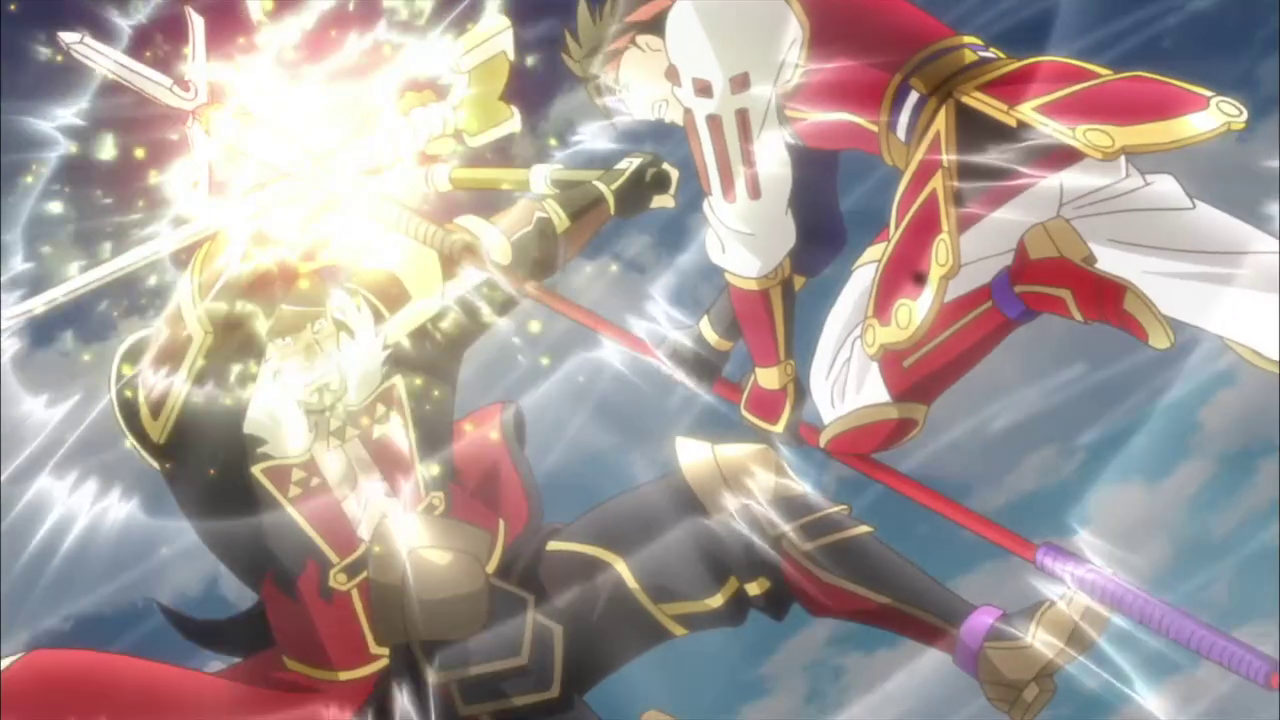 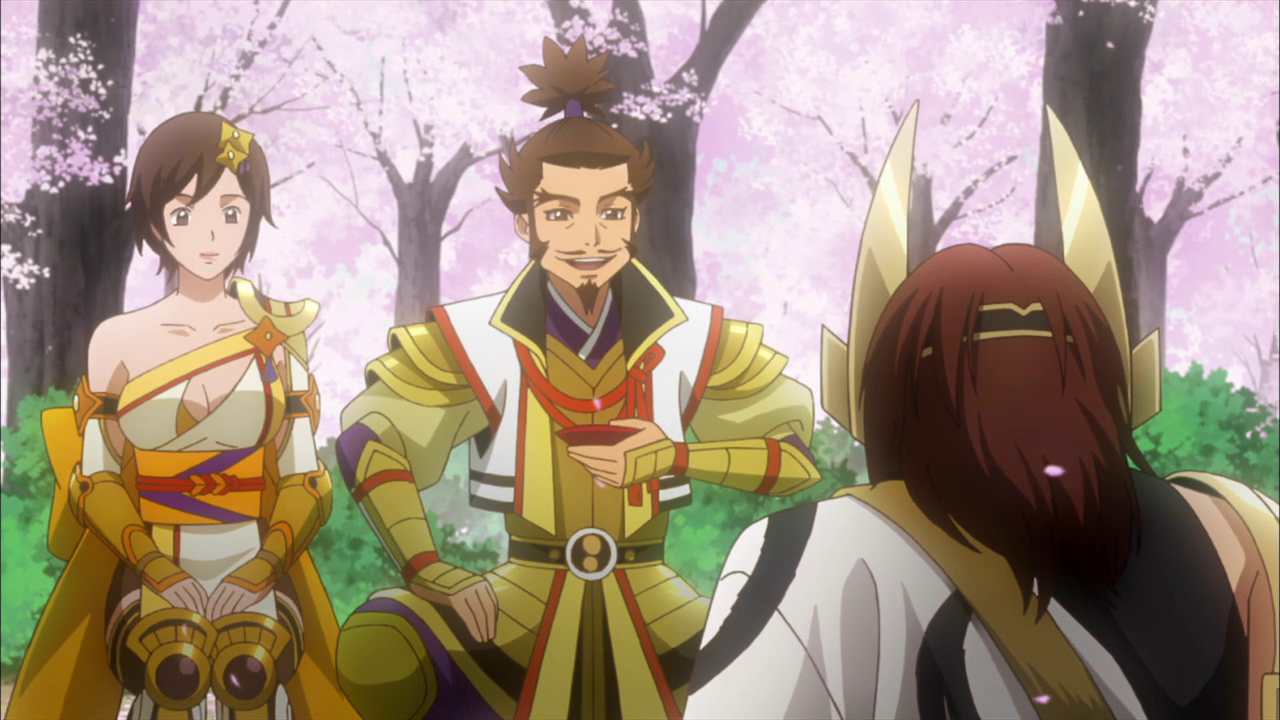 Sengoku Musou Ep 1: During Hideoyoshi's rule in the Warring era, he send his best commander, Mitsunari to attack the Hojo castle and it ended as a stalemate for three months. It was until Sanda Yukimura broke the defences and defeated the lord of the castle, Hojo Ujyasu that Japan is finally united for now...

If you have not played any of the Samurai Warriors games, you are completely lost and furthermore, it is based on the latest installment-Samurai Warriors 4 and the upcoming sequel 4 II. The show jumped right in with captions of who's who in the first episode with little development. The action scenes were all right although the display of superhuman skills were mediocre. The last scene with Hideoyoshi dropping his cup of wine is already a sign of dark times to come and with the number of Sengoku theme series telling the viewers what is going to happen, you can expect more of the same drama in this series.